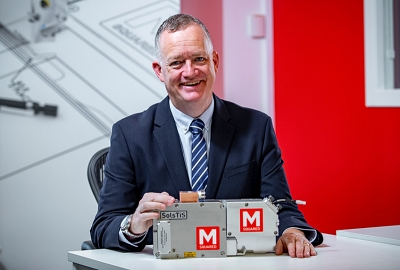 Laser and quantum technology developer M-Squared Lasers has revealed a new £32.5 million package of debt and equity finance that the company says will help it to scale up activities.

The support includes a £20 million debt facility agreed with Santander, and a £12.5 million injection of funding from the newly established Scottish National Investment Bank.

The money has been used to refinance earlier loans provided by Barclays, and has also enabled investor BGF to sell part of its stake in the business.

M-Squared announced that the Santander debt facility would allow the firm’s founders and management team to “fund the acquisition of the substantial part of BGF’s current shareholding”.

“BGF will realise the majority of its existing shareholding in M-Squared, but will continue to retain a meaningful stake going forward having first invested in the business in 2012 as a long-term partner,” announced the laser firm.

Patrick Graham from BGF added: “M-Squared, one of BGF’s first investments, received £6.4 milion across three rounds of funding over the course of the past eight years. The company has grown ten-fold since, crystallizing a strong return for BGF.”

State aid
The M-Squared investment represents the very first deal completed by the new Scottish National Investment Bank, which had received approval for its establishment and £2 billion capitalization from the European Commission within the past month. The commission applies state aid rules on European Union members.

Commenting on the development, Scotland’s First Minister Nicola Sturgeon said: “The Scottish National Investment Bank will help to tackle some of the biggest challenges we face now and in the years to come, delivering economic, social and environmental returns.

“It is hitting the ground running with its first major investment in M-Squared – a great example of the ambitious and innovative companies we have here in Scotland that will be key to our economic recovery and future prosperity.”

“We are delighted that the Scottish National Investment Bank has invested in M-Squared as its very first business - our shared commitments to society and the environment makes this an ideal partnership that will enable accelerated growth and progress in frontier technologies.”

Quantum push
M-Squared has been one of the major beneficiaries of the UK’s heavy investment in quantum technology commercialization over the past five years, with many of the projects supported by the National Quantum Technologies Programme relying on lasers provided by the firm.

Among the latest of those projects is "DISCOVERY", which sees M-Squared lead a £10 million effort to overcome some of the remaining issues surrounding photonics-based approaches to quantum computing.

The company is also a key supplier involved in several quantum-related projects overseas, benefitting from the massive global push to develop commercial applications of the emerging technology - including a new bilateral program between the UK and Canada.

In its most recently published financial results, for the year ending February 2019, M-Squared posted a pre-tax profit of £2 million after sales jumped more than 30 per cent year-on-year to £17.7 million.

However, that same set of results showed that the company had £6.5 million in borrowings, and stated that M-Squared would not be in a position to make loan note repayments of £1.5 million coming due in June and September last year.

The latest filings with the UK’s Companies House now show that two loans due to Barclays were repaid November 19, following the new agreement with Santander.