Glasgow laser company is confident of significant growth this year to follow strong 2014. 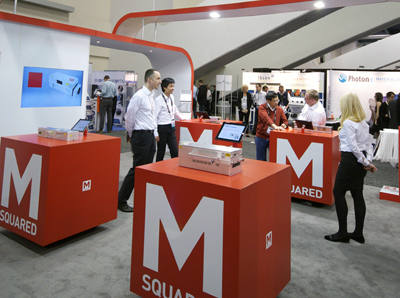 M-Squared is based at the West of Scotland Science Park in Glasgow, and has offices in the US including San Jose, California. The company develops and manufactures lasers and photonic instruments for a variety of applications, including oil and gas exploration, cancer detection, and the spectroscopic detection of explosives.

A new customer to Barclays, the company has just received a funding package worth more than £2.5 million ($3.8 million). The deal, delivered by Barclays Technology Media & Telecoms team, will enable the business to increase exports to key global markets including North America – an area where sales are already experiencing substantial growth.

M-Squared co-founder Dr Graeme Malcolm said, “We’ve been expanding our export business for some time and have been making great headway in world markets. This latest investment will provide important support as we continue to pursue our ambitious growth objectives.

'Strong US growth'
“Our US business has been growing strongly, with revenues doubling in 2014 as a result of rising demand for laser systems in areas such as quantum technologies. We were impressed by the specialist sector knowledge from Barclays and look forward to developing our relationship in the years ahead.”

Ally Scott, Managing Director, Barclays Corporate Banking Scotland said: “M Squared is an impressive business and a prime example of the world leading technology companies that are flourishing from a Scottish base. Its ambitious plans for growth are backed by a robust strategy, strong management team and a commitment to invest in R&D - all the elements we look for as funders.”

M-Squared currently employs more than 50 staff and has a turnover of £10 million. The company posted a year-on-year revenue increase of 40 per cent in 2014 and expects to report similar annual growth this year.

In the recent Sunday Times’ Tech Track 100 listing, M Squared Lasers was winner of the ‘One to watch’ category. The company was also selected to join a specialist group at the London Stock Exchange’s two-year ELITE program for high-growth private UK companies last April.