Bio-insipred design could lead to novel emitters and sensors. 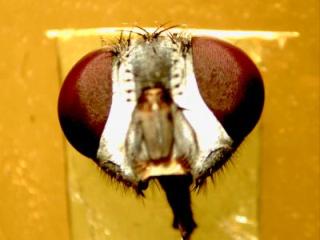 The complex optical principles involved in insect vision have become increasingly attractive to developers, who recognize that lenses and sensors based on compound eyes could exhibit specialized imaging behavior which simpler structures cannot match.

Now a team at Pennsylvania State University has approached the issue from the opposite direction, and designed a light-emitter based around a similar compound design in order to determine what its illumination properties might be.

The result turns out to be a better angular distribution of the light than conventional emitters usually provide, and a more uniform scattering. The work was published in Applied Physics Letters.

"A compound eye is a remarkable optical device for imaging with a wide field-of-view, and is an appealing structure for miniature cameras and optical sensors," noted the team in the APL paper. "The same morphology should also be very attractive, by virtue of reciprocity, to emulate in light-emitting devices for illumination of a broad angular sector."

Testing the theory required some ingenuity, since the diversity of optical elements in a compound eye and the resulting scatter patterns made a computational modelling approach to the problem too complex to be practical.

So instead the team decided to simply work with actual compound eyes, specifically ones formerly owned by the common blowfly. Each optical structure was coated with a layer of fluorescent material, and an ultraviolet laser used to stimulate emission. Measuring the angular distribution of the visible light being produced allowed the illumination properties of the structure to be quantified.

"It is much easier to just go ahead and fabricate the actual device and see what happens," commented Raúl Martín-Palma of Pennsylvania State University. "We said OK, we can make something artificial using the same replicating structure to emit light in all directions, rather than what we have now which are just planar light-emitting diodes."

No flies required
Coating a blowfly cornea with a 900-nanometer layer of the fluorescent coating of choice, tris(8-hydroxyquinolinato)aluminum also known as Alq3, was achieved using a modified deposition technique called conformal-evaporated-film-by-rotation (CEFR), a relatively low-temperature and non-corrosive technique.

When subsequently induced to emit light by a shortwave UV-laser, the coated structure demonstrated a lesser angular dependence of emission compared to an equivalent flat structure also coated with Alq3, and to scatter light more uniformly in all directions.

The team theorized that the presence of multiple tapered nanonipples, effectively sub-wavelength structures, in each facet of the compound eye could be behind the change in behavior. An interaction between those sub-wavelength elements and the multi-wavelength-scale facets may nudge the emission towards being more omnidirectional in the forward half of the horizontal plane.

Real-world applications could eventually benefit, if the increased emission and angular distribution could be adapted into extremely minute light-emitting diodes and detectors, able to process light output and input from a "staggeringly wide field of vision," according to the team.

"We have already developed a technique to mass-replicate biotemplates at the nanoscale, including compound eyes of insects," Martín-Palma said. "So now when we want to make 100 bioreplicated eyes, we don’t have to kill 50 flies. We can make multiple copies out of one template."