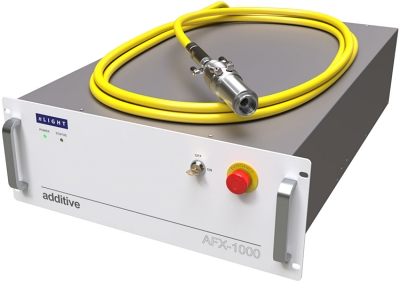 nLight, the US company that specializes in fiber lasers for industrial and directed energy weapons applications, has posted record quarterly sales of $62 million for the three months ending September 30.

Beating the company’s prediction of around $57 million, that total is partly the result of last year’s acquisition of beam control expert Nutronics.

But the latest figures also reflect stronger sales in the industrial sector, where nLight’s 6 kilowatt sources now represent more than half of the company’s fiber laser revenues from materials processing applications.

And the company is already expanding again. CEO Scott Keeney revealed the recent acquisition of Italy-based component and packaging firm OPI Photonics, while a new site in Detroit including an applications laboratory and a demonstration center is now up and running.

Additive laser launch
Keeney said that the solid level of demand should continue into the current quarter, with the company also launching a new fiber laser that he believes will be a game-changer for additive manufacturing applications.

Designed specifically for use in powder bed fusion systems, the “AFX-1000” laser is claimed to be the world's first programmable high-power fiber laser that is able to switch between a true single mode beam and other larger beam profiles without the use of free space optics.

“Changing size and beam shapes from inside the laser is the most economical, repeatable, and reliable way to maximize [the] productivity [of] powder bed machine tools,” he told an investor call discussing the latest results.

“nLight’s AFX laser can replace multiple lasers, optics, and a scanner. AFX-based powder bed tools have demonstrated higher-quality parts at significantly faster build rates, which will enable the use of metal additive manufacturing tools for series production across a broad range of industries and applications.”

In ring mode geometry, the AFX-1000 is said to stabilize large melt pools, reducing the amount of soot and spatter to improve material quality and production yields. Discrete beam profiles can be selected on-the-fly at rates of up to 30 Hz, which nLight says will help control thermal strain that can lead to stress fractures, a frequent cause of part failure.

In terms of speed, the company says that the AFX single-laser approach has been shown to produce “fully dense” material at build rates exceeding 100 cm3 per hour.

OPI integrated
Turning to the OPI acquisition, Keeney said that the two companies had already been working together for several years, and that the integration was progressing smoothly.

“We have a deep understanding of their technology, which includes couplers, switches, and diode laser packaging technology,” he added. “We have already qualified and shipped fiber lasers with OPI's technology that are being used in production environments.”

On the industrial side of things, Keeney sees an opportunity in welding applications, where nLight currently has only a small market share - something that the new Detroit facility is intended to address.

The same is true of the additive manufacturing segment, where the new seven-mode AFX laser is said to be particularly suited to producing fine features. “You typically want to use a single mode laser to provide a very small 75 micron spot to do that,” explained Keeney.

“As you move to go faster, you can do a couple of things, you can adjust that beam, you can add more lasers. But what we have demonstrated is [that] the more effective way to increase the speed - and either maintain or improve the quality of that part - is to change that beam to one that will allow the process to go faster.”

Bipartisan laser weapons support
Asked whether the changing political landscape in the US would have any impact on the directed energy weapons sector in the country, Keeney responded:

“The short answer is no. We've seen strong bipartisan support for directed energy. And it's really both sides of the aisle. I believe, even under [President] Obama, the directed energy budget doubled. And it remains a very high priority for [the US Department of Defense].”

Partly fueled by the addition of Nutronics - which contributed $9.2 million in revenues during the latest quarter - nLight’s defense-related sales more than doubled year-on-year.

With nLight's full-year sales for 2020 now expected to reach around $220 million, the CEO noted that this would represent compound annual growth of 20 per cent over the past six years.

• Investors appeared to be pleased with the latest nLight developments, sending the company’s stock price up 25 per cent after the results were released. Now trading at just under $29 on the Nasdaq, nLight’s stock price equates to a market capitalization of just over $1.1 billion.