University of Exeter measures properties of biopolymers as models of biological tissues. 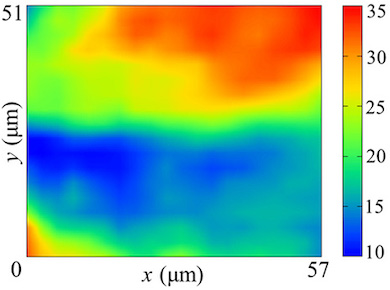 The micromechanical properties of cells and tissues are a critical aspect of their behavior, determining several aspects of their physiological function.

Spectroscopic methods of measuring those properties have been a promising area of research for some time, thanks to their potential for revealing details of subcellular behavior beyond the reach of traditional mechanical testing.

A study led by the University of Exeter has now demonstrated an optical elastography technique that could ultimately make it easier for health professionals to detect biomechanical alterations of cells and tissues in clinical settings.

As published in Science Advances, the breakthrough used Brillouin spectroscopy to measure the viscoelastic properties of biopolymer hydrogels, models of biological systems able to mimic the relevant properties of tissues.

Brillouin light scattering occurs when photons traveling through matter interact with phonons, the compressive waves created in the same matter by external stimulus or compression - effectively a change in the density of the material caused by an acoustic wave.

Advances in instrumentation and data handling have made the technique increasingly sensitive and capable of high spatial resolution. Techniques based on Brillouin methods have already been used to probe the properties of cancerous tumors, where a change in the stiffness of biological tissues under compressive force is a direct result of the proliferation of malignant cells.

The new Exeter study applied the technique to gelatin gels, simple systems derived from the ubiquitous structural protein collagen, and collected the resulting Brillouin spectrum for comparison with real tissue samples. In trials, the project found that varying the polymer concentration allowed the model system to cover a wide range of static and dynamic macroscopic mechanical moduli that replicate those of many biological tissues.

"Gelatin is a model system in which the macroscopic physical properties can be manipulated to mimic all the relevant biological states of matter, ranging from the liquid to the gel and the glassy phase," noted the project in its published paper. "We demonstrate that Brillouin spectroscopy is able to reveal both the elastic and viscous properties of biopolymers that are central to the structure and function of biological tissues."

Investigating the relationship between the static and dynamic macroscopic mechanical parameters of the gelatin gels and Brillouin spectra obtained at 532-nanometers showed that the Brillouin-derived viscoelastic parameters were dominated by factors such as the solvent relaxation dynamics.

This has implications for biological systems, since the microscopic viscosity is key to transport processes in cells, and regulates the rate of some biological processes at the nanoscale. Whilst water plays a major role in determining mechanical properties, the effect of the proteins, lipids and other components acting as a solute is an influence on viscosity, and so on the transport of metabolites and active molecules, according to the Exeter team.

“We set out to understand the basis of Brillouin signals in biomedical samples," noted Francesca Palombo from the University of Exeter. "While taking a step back to analyse the fundamentals of this light scattering process, we made a substantial advancement in that we now understand the distinctive contribution of interfacial dynamics, beyond bulk water, to the viscoelastic response of biological tissues."

This in turn implies that phase changes could provide ideal scenarios for Brillouin imaging to provide useful information about biological systems, in addition to the more well established creation of anisotropy by acoustic means.

"We are still working on establishing the relevance of this technique in medical sciences,"said Palombo. "However it is indisputable that it offers an invaluable contrast mechanism to detect physiological and disease states."