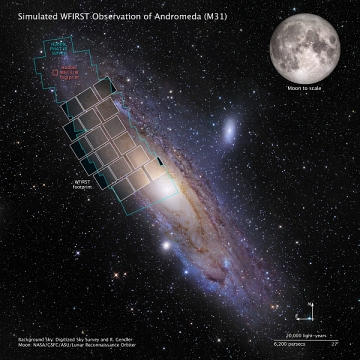 WFIRST: widening the field of view in space

NASA has announced that the next major space telescope project it wants to launch after the much-delayed James Webb Space Telescope (JWST) is ready to move into the construction phase.

The Wide-Field Infrared Space Telescope (WFIRST), currently slated for launch in the mid-2020s, is said by the agency to have passed a “critical programmatic and technical milestone”, meaning that hardware development and testing can now begin.

Although the diameter of its primary mirror will only be the same size as that of Hubble Space Telescope, WFIRST's optical system will boast a field of view 100 times that of its predecessor.

As a result, NASA says WFIRST would be able to observe the entire Andromeda galaxy in just three hours. For comparison, Hubble took around 650 hours to image about half of the same galaxy.

Future funding
During a five-year mission with a possible five-year extension, WFIRST is expected to investigate light from more than a billion galaxies, as well as perform a microlensing survey of the inner Milky Way to locate thousands of exoplanets.

“With the passage of this latest key milestone, the team will begin finalizing the WFIRST mission design by building engineering test units and models to ensure the design will hold up under the extreme conditions during launch and while in space,” said the space agency.

However, the project’s future remains in the balance. WFIRST has funding committed through September 2020, but last month the Trump administration’s budget request for fiscal year 2021 called for WFIRST support to be terminated.

In fact for the current fiscal year, the presidential request for WFIRST had also been zero - but Congress subsequently stepped in with more than $500 million to keep the project on track for a 2025 launch date.

“The FY2021 budget request proposes to terminate funding for the WFIRST mission and focus on the completion of [JWST], now planned for launch in March 2021,” NASA stated. “The Administration is not ready to proceed with another multi-billion-dollar telescope until [JWST] has been successfully launched and deployed.”

According to SpacePolicyOnline.com, the development of WFIRST has already been delayed several years because money earmarked for it was instead spent on the huge JWST overruns.

Higher priorities
WFIRST had in fact been pencilled in for launch in 2020 originally, and in 2010 was listed by the US National Academies decadal study as the top priority for launch.

But in the latest NASA summary of the presidential budget request, the administration’s priorities diverge with that view. “The [FY2021] budget proposes termination of the WFIRST mission due to its significant cost and higher priorities within NASA, including successfully launching and deploying JWST,” it states, adding:

“WFIRST was originally proposed as a less-than-$2 billion space telescope in the Decadal Survey. The current WFIRST architecture, which was supported by two National Academy studies, differs from that discussed in the 2010 Decadal Survey and exceeds $3 billion.”

One of the casualties of the budget negotiations could be the coronagraph technology demonstration, which WFIRST proponents want to accompany the telescope to help provide direct imaging of exoplanets.

Essentially a mask to block out bright starlight from a target stellar-planetary system, the coronagraph designed for the WFIRST mission would enable scientists to view exoplanets directly, and in their true colors for the first time.

While the cost of the main WFIRST architecture is now set at $3.2 billion, in its latest announcement NASA separated out for the first time the likely additional cost of the coronagraph element.

It said that the additional budget needed for both the coronagraph and the five years of WFIRST-related operations and science would be in the region of $700 million.

In stark contrast, the presidential request for FY2021 earmarks more than $12 billion in support of the “Moon to Mars” campaign (and more again in each of the next four years). It is aiming to land the next man and the first woman on the lunar surface by 2024 - in other words, before the end of the next US presidential term.

While WFIRST Is on schedule and on budget for a Fall 2025 launch, we need to again ask Congress to restore the mission to the Federal Budget. Please ask your representatives to #SaveWFIRST by signing Representative Beyer's Dear Colleague letter. https://t.co/CVGFHqef0A

Call for Congressional support
SpacePolicyOnline.com reported that, while Congress might be expected to repeat its previous efforts to restore funding for WFIRST, whether or not that support would extend to the coronagraph element remains to be seen.

In response to the presidential request for termination Don Beyer, a Democrat member of the US House of Representatives for northern Virginia, is calling for the House Appropriations Subcommittee on Commerce, Justice, and Science to include $505.2 million in funding for WFIRST.

Beyer’s “Dear Colleague” letter states that the mission will allow astronomers to answer some of the most high-priority scientific questions facing humanity, related to the origin and evolution of the universe, and the potential for life on planets around other stars.

• Meanwhile, JWST is now said to be a “fully assembled observatory”. NASA tweeted a time-lapse video of the instrument being built (below), ahead of scheduled environmental tests. If all goes according to plan, the telescope will be launched in March 2021.

#NASAWebb is now a fully assembled observatory, and has accomplished multiple large deployments and movements that it will perform in space. This new time-lapse video highlights these recent critical milestones. #JWST #timelapse pic.twitter.com/N027BGFjuv