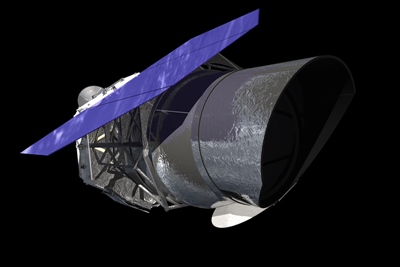 The space telescope, tentatively scheduled for launch in the mid-2020s, will survey large swathes of the sky in the near-infrared spectrum, looking to help reveal more about the nature of dark energy and exoplanets.

“The efforts include fabricating, as necessary, aligning, testing, verifying and delivering the telescope to NASA’s Goddard Space Flight Center in Greenbelt, Maryland.

“The contractor also will provide post-delivery support for both the observatory integration and test program, as well as for in-orbit observatory checkout and commissioning.”

Repurposed design
According to NASA’s dedicated WFIRST web site, much of the telescope's optical hardware was already built by Harris when it was under contract to another agency - and has since been made available to NASA.

“The telescope is a spaceflight-qualified 2.4 m, obscured two-mirror system,” it states. “Repurposing modifications will include conversion to a three-mirror anastigmat (TMA) optical configuration to enable a wide field-of-view instrument and replacements for hardware that was not provided to NASA. This existing hardware significantly reduces the development risk of the WFIRST payload.”

The Harris contract award follows the selection in May this year of Ball Aerospace to provide the primary instrument components for the WFIRST mission. A month later, Teledyne Technologies was contracted to make the mission’s 300-megapixel SWIR focal plane detector, at a cost of $23 million. Overall, the WFIRST budget is estimated at $3.2 billion.

While the 2.4 m diameter primary mirror is the same size as that used in the Hubble Space Telescope, by utilizing a very different optical design WFIRST will be able to capture images of the sky 100 times larger than Hubble is capable of.

Searching for signs of life
The mission will also feature a coronagraph instrument that should greatly improve direct imaging and characterization of exoplanets, by blocking out the light from the exoplanet’s host star.

But the wide-field imager is the primary instrument, and NASA plans for it to image light from a billion galaxies over the anticipated six-year duration of the mission.

“It will perform a microlensing survey of the inner Milky Way to find [around] 2600 exoplanets,” states the US space agency. “The Coronagraph Instrument will perform high-contrast imaging and spectroscopy of dozens of individual nearby exoplanets.”

Ultimately, the plan is to observe their properties of more than 50 exoplanets in far greater detail than has been possible thus far. “It will be a huge leap forward compared to current instruments,” says NASA.

“Most exciting will be spectral observations of the light from the planets to see what the properties are of the atmospheres and possibly surfaces. Searches will be made for signatures of life on the planets.”