$23M deal to provide SWIR detectors that will make up a 300 million-pixel focal plane for NASA project. 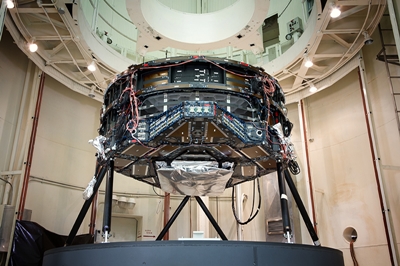 NASA’s Wide Field Infrared Survey Telescope (WFIRST), which will be put to work searching for exoplanets following an expected launch in the coming decade, will feature a 300-megapixel infrared focal plane array built by a division of Teledyne Technologies.

Teledyne’s “scientific and imaging” division, based in California, has just landed a $23 million contract to provide what will become the largest such detector operating in space.

Coronagraph
The selection of Teledyne follows last month’s $113 million award to Ball Aerospace for the key optical system that will sit at the heart of the 2.4 meter-diameter space telescope . In terms of its primary collector optics, WFIRST is the same size as Hubble, but will feature both a much wider field of view and a coronagraph unit that will enable it to identify exoplanets using a technique known as “microlensing”.

Like many of NASA’s ambitious space telescope projects, WFIRST has been threatened by budget cuts in the past. But with a key Senate sub-committee last week approving $352 million in spending for the project, WFIRST’s future now appears relatively secure.

For the focal plane array element, Teledyne’s team will assemble 18 of its “H4RG-10” individual arrays. Each of those comprises a 4096 x 4096 pixel grid, based on a mercury cadmium telluride (HgCdTe) absorber layer and fabricated using a silicon CMOS process rather than CCD sensor technology.

Together, those sensors will deliver a 300 megapixel short-wave infrared (SWIR) camera with a field of view 100 times wider than Hubble’s.

For astronomers using WFIRST, that will translate to a better insight into the mysteries and distribution of dark matter and dark energy, by measuring the light produced by a billion galaxies over the mission’s planned six-year lifetime.

Exoplanet atmospheres
Another key application will be searching for Earth-like exoplanets, with WFIRST’s coronagraph able to both directly image distant worlds and perform spectroscopy that can identify key gases that might be associated with extra-terrestrial life, like oxygen or methane.

During a panel session dedicated to the search for Earth-like exoplanets held at SPIE’s Astronomical Telescopes and Instrumentation conference last week, leading astronomers and engineers said that coronagraph equipment was becoming a key part of that search. They added that WFIRST would be able to see any of the types of planet that feature in our own Solar System, with the exception of Mercury due to its proximity to the Sun.

Teledyne CEO Robert Mehrabian commented on the contract win by saying: “This mission exemplifies Teledyne’s commitment to NASA, with Teledyne detectors also being used on Hubble, the James Webb Space Telescope, the Wide-field Infrared Survey Explorer, and many Earth science and planetary missions.”

The firm also noted that the H4RG-10 infrared array had been advanced to NASA “technology readiness level” 6 (TRL-6) during a 45-month development contract that began in 2014.

TRL-6 is the level at which components are qualified for use in the harsh environment of space. In addition to the infrared arrays for the main optical instrument aboard WFIRST, Teledyne is working to develop visible light detectors that will be used in the coronagraph instrument.