Cognex impresses with another record year

Sales at machine vision firm up again, but dip in demand from consumer electronics sector and China dampens rate of growth. 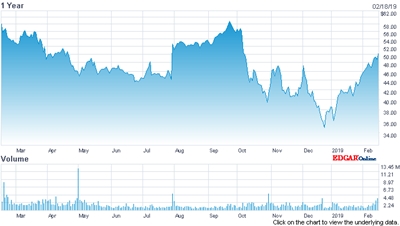 Massachusetts-based Cognex, the market leader in machine vision technology, has warned of a slowing outlook as it reported its ninth successive year of sales growth.

Net income also rose strongly, however that was partly the result of favorable changes to US corporate tax cuts, and the company’s annual operating income of $221 million was down around 15 per cent from $259 million a year ago as Cognex continued to invest heavily in technology development.

CEO Robert Willett said in response: “We performed well across most end markets. An exception was consumer electronics - our largest industry vertical - where a few large customers in OLED display and smartphone manufacturing scaled back their spending on machine vision after making substantial investments in 2017. Putting those customers aside, revenue from the rest of our business grew by 18 per cent year-on-year.”

China slowdown
Willett added that lower spending by customers in China continues to weigh on the company's growth rate, as it did at the end of 2018. Similar effects are now evident in other markets the company serves, most noticeably in the US automotive sector.

Three months ago, Cognex executives had warned that the closing quarter of the 2018 would be hit by the wider economic slowdown in China. With annual sales growth dropping from 44 per cent in 2017 to just 5 per cent in 2018, the impact of that and reduced investments by consumer electronics clients is now evident.

In a conference call to discuss the 2018 results, Willett reported particularly strong growth from clients in the logistics sector, telling investors:

“Our logistics business grew by more than 50 per cent over 2017. With annual revenue surpassing $100 million, it has become a meaningful part of our business.”

That momentum looks set to continue, with the CEO claiming that Cognex is now “widely recognized” as the market leader for machine vision in the logistics sector, which includes major retailers such as Amazon.

Demand growth from automotive industry customers came in at just under 10 per cent, but on track with the company’s long-term targets for that sector.

“Following two consecutive years of faster growth, the [auto] industry began to slow in the second half of 2018,” Willett added.

Flat outlook
For the current quarter, the Cognex team is expecting to post around $170 million in sales – virtually flat with the same period last year.

“Cognex is performing well given current market conditions,” summed up the CEO, adding that the outlook remains “uneven” across the company’s various and markets and geographic regions.“Logistics, deep learning, and 3D all represent near-term growth drivers for us,” he added. “Demand from China is soft after many quarters of out-performance, and that softness is affecting electronics, OEMs, and other Cognex customers who rely on exports to China.

“In addition, we are seeing delayed spending and project push-outs by our customers in the American automotive market.”