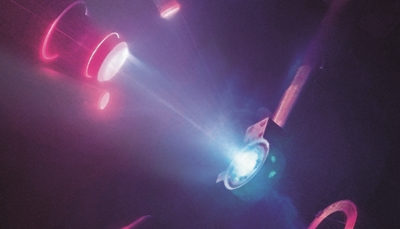 The University of Rochester’s Laboratory for Laser Energetics (LLE), which houses one of the most powerful lasers in the US, has slammed what it calls “potentially devastating” budget cuts threatened by the Trump administration’s budget request for fiscal year 2019.

Home to the giant 60-beam, 40 kJ Omega laser, as well as the Department of Energy’s (DOE’s) National Laser Users’ Facility, LLE users perform cutting-edge research on laser fusion and other areas of fundamental physics, largely but not exclusively with a view to supporting nuclear weapons stockpile stewardship.

Three-year ‘ramp-down’
News of the threat to LLE operations broke last week, when Physics Today reported that proposed cuts to the DOE’s science budget would take the form of a “three-year ramp-down” of LLE, starting in October.

The lab is one of three major US facilities working on inertial confinement fusion (ICF) – regarded by many in the community as offering a route to a viable source of fusion energy – and work at the Rochester facility complements similar research carried out at the larger, 192-beam National Ignition Facility (NIF) in California.

According to Physics Today, the LLE closure would be part of a wider $104 million funding reduction for ICF-related research proposed in the DOE budget recommendation.

Responding via the LLE web site on February 21, laboratory director Mike Campbell wrote that in a meeting with New York state representatives and key staff there was "widespread, bipartisan and enthusiastic support" of LLE and the ICF program.

Campbell wrote: "In all of our discussions we spoke of the importance of the program and the role that LLE, our partner laboratories, target contractors, and colleagues in universities play in making it the world's best effort in ICF, high-energy-density science, and laser science and technology.”

The LLE director also described those staff and representatives as “shocked and upset” with the budget cuts in the presidential proposals, and said that they promised to work together to reverse them. “They also reminded us that the [presidential budget request] is a first step and request, but [that] they have the power of the purse,” he added.

“The University was disappointed to learn that the Administration’s fiscal year 2019 budget proposes a significant cut to the Laboratory for Laser Energetics (LLE) in FY19 and “a three-year ramp-down” in federal support. We are trying to make sense of this proposal, which jeopardizes the cutting-edge science and world-class education being conducted at the Lab.

“The Lab is exceeding all its scientific milestones set by the US Department of Energy and has grown to be DOE’s largest university-based research center in the nation. It is home to the DOE’s National Laser Users’ Facility, which brings more than 400 scientists from across the country and the world to Rochester to use its facility, and is in the final stages of its renewal of its five-year, $345 million Cooperative Agreement with the federal government. In addition to the more than 350 highly skilled scientific and engineering staff, over 100 students from multiple institutions are conducting research on LLE’s state-of-the-art laser facilities.

“Although we are concerned by these developments, we are encouraged by the historic, strong bipartisan support the LLE has enjoyed from the New York Congressional delegation, the State of New York, and the US Congress, which recognizes the significant contributions the LLE makes to national and economic security, as well as the strategic work being done that can lead to an independent energy future.

“We thank and acknowledge our Congressional delegation for their consistent leadership and support. We are also heartened by the recent two-year bipartisan budget agreement agreed to by Congress that provides increased funding for university-based scientific research. We look forward to working with our delegation to provide robust, sustainable support for the LLE in FY18 and FY19 and avert this potentially devastating cut so it can maintain US global leadership and security and continue to be an engine for regional economic growth and innovation.” 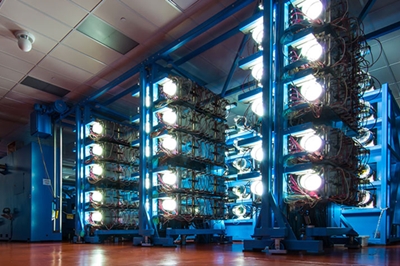 SPIE: advocating for LLE funding
That sentiment has been backed up by SPIE, the member society for optics and photonics (also the publisher of optics.org). Spokeswoman Jennifer Douris O’Bryan, the organization’s director for government affairs, said:

“It is important to keep in mind that Congress ultimately controls appropriated funds, and past precedent has shown Congress’ support for the sciences despite calls for significant cuts in last year’s president's budget. SPIE will be tracking this issue and advocating for robust funding of the sciences in the FY19 appropriations process, including the Laboratory for Laser Energetics.”

Last week, SPIE responded to the wider effects of the budget request on US science funding, describing as a “mixed bag” proposals that indicate particularly severe cuts at the National Institute of Standards and Technology (33% cut), the US Geological Survey (21% cut), and National Oceanic and Atmospheric Administration (20% cut), but leaves other funding agencies relatively unscathed.

SPIE’s CEO Eugene Arthurs said: “Technology drives our economy, and innovation doesn’t happen in a vacuum. Research - and federal funding for that research - is vital to our economy and critical to the US maintaining its place on the science industry stage.

“It is clear to us that worldwide investment in science and technology is driving growth; we want to make sure that the US is a big part of that growth as well.”

As part of its coordinated optics and photonics advocacy effort with other professional societies, SPIE representatives will form part of the National Photonics Initiative (NPI) delegation heading to Washington, DC on April 24-25, for the annual Capitol Hill Visits Day.