Researchers at Northwestern University in the US have used a technique called soft interference lithography to produce high-quality periodic metallic nanostructures whose symmetry can be tailored at will. The 2D plasmonic crystals produced are promising for applications such as thin-film photovoltaics, light-emitting devices and optical switches. 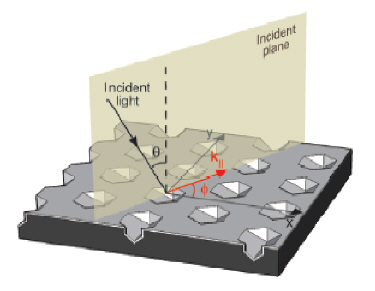 The tunable structures will be useful in plasmonics – a new branch of photonics that exploits surface polariton plasmons (SPPs). SPPs arise from the interaction of light with the electrons that oscillate at a metal's surface. And metallic and metallodielectric nanostructures that exploit SPPs are alternatives to planar waveguides and photonic crystal structures for strongly guiding and manipulating light.

Teri Odom and colleagues have developed a new low-cost and large-area nanofabrication method based on soft interference lithography (SIL) that can produce 2D plasmonic crystals with different 3D unit cell shapes and lattice symmetries. These 2D arrays of metal nanostructures can trap light at the edges of the unit cells.

The researchers began by first creating "low symmetry" lattices, such as rhombic shapes, over areas as large as cm2. Using their new form of SIL, they were able to create plasmonic crystals with periodicities as small as 400 nm and subwavelength feature sizes of just 200 nm. The team also constructed special band diagrams by measuring angle-resolved light reflection spectra from the nanostructures. These dispersion diagrams are analogous to photonic crystal band diagrams and indicate where incident light is trapped in the structures.

"Our results show that these large-area, nanostructured substrates can be designed to create intense electromagnetic fields and to trap incident light over a broad frequency range," Odom told nanotechweb.

The team now plans to look at using the broadband plasmonic substrates and their enhanced light-matter interactions in applications such as thin-film photovoltaics. The work might even lead to solar cells that are more efficient in harnessing light over a broad range of wavelengths and angles.