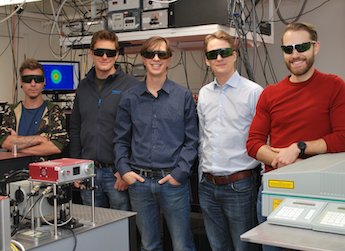 A novel approach to imaging the dynamics of sprays such as those used in liquid fuel combustion and industrial painting could help to reduce wastage and protect the environment.

Developed by a project at Lund University, the technique simultaneously records both x-ray absorption and two-photon laser-induced fluorescence. The work was reported in Optica.

The major challenge in visualizing an optically dense spray is to mitigate the effects of light scattering from droplets and blobs of liquid that are present outside the image plane and cause a blurry image, according to the project.

Both two-photon laser-induced fluorescence (2p-LIF) and x-ray imaging can help tackle this hurdle. X-rays are preferentially absorbed rather than scattered, so measuring the amount of x-rays transmitted through a spray has been used to reveal the amounts of liquid present; and 2p-LIF provides much higher image contrast than a single-photon process, if the spray contains a suitable source of fluorescence.

The Lund project combined both techniques, simultaneously using soft x-ray radiography and planar 2p-LIF to image the disintegration of liquid jets, an experimental architecture termed a "challenging configuration" by the group. Used in combination, the fluorescence images provide details on the sprayed liquid's form, including its size and shape, while the x-ray radiographs quantify how the liquid is distributed.

One advantage the project had was access to a new table-top laser-plasma accelerator developed by a group at Lund's High-Power Laser Facility, designed to produce x-rays tailored for high-resolution and time-resolved imaging without the complexity of a large synchrotron.

This device focuses a femtosecond laser pulse onto a gas to generate its x-rays, and the project was able to use a fraction of the same femtosecond pulse as the starting point for its 2p-LIF excitation.

"Two-photon imaging of a relatively large area requires higher energy, ultrashort laser pulses," said Berrocal. "The fact that we used an intense femtosecond laser beam to generate x-rays meant we could simultaneously perform x-ray and two-photon fluorescence imaging. Performing these two imaging modalities at the same time with a relatively large viewed area has not been done before."

Proof-of-principle tests on sprays of water containing a fluorescent marker confirmed that the combination of techniques produced values of the equivalent path length (EPL), taken as a measure of droplet size, which showed measurement sensitivity higher than that found with synchrotron radiation alone.

"This imaging approach will make studying sprays much easier for both academic and industry researchers," commented Diego Guénot of Lund University. "They will be able to perform studies, not only at the handful of synchrotron facilities, but also at various laser plasma accelerator laboratories around the world."