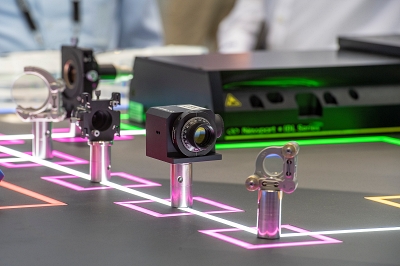 MKS Instruments, the diversified US technology firm that incorporates a number of well-known photonics brands, has posted sales of exactly $500 million for the closing quarter of 2019.

That total was higher than anticipated - the company had earlier predicted sales of somewhere between $445 million and $495 million - and was largely thanks to a solid rebound in demand from the semiconductor industry.

Cell phone bounce?
New MKS CEO John Lee, who officially took over as lead executive from long-term incumbent Gerry Colella at the start of January, said in a company release:

“Our top-line growth exceeded our expectations, driven by strong sequential growth in our semiconductor market revenue, which increased 22 per cent in the quarter.”

While MKS sells a huge range of products, many outside the photonics sphere, the company is home to major names like Spectra-Physics lasers, Newport, Ophir Optics, and the laser micromachining specialist Electro Scientific Industries (ESI), which it acquired last year in a billion-dollar cash deal.

“We believe the increasing breadth of our technology portfolio, and our commitment to innovation and operational excellence uniquely position MKS to address a broad range of growing advanced semiconductor applications,” said Lee.

The CEO added that within MKS’ “Light and Motion” business division the impact of ongoing trade tensions between the US and China on company sales had stabilized - divisional sales were up 2 per cent sequentially in the closing quarter of 2019, with Lee noting demand for lasers across applications in solar, displays manufacturing, and PCB drilling.

And although business has not yet returned to the levels seen before those geopolitical tensions, during an investor conference call to discuss the latest results Lee indicated that there were some signs of a “thaw” in relations.

If a more positive trading environment does emerge later this year, it looks likely to be augmented by something of a rebound in the key cell phone sector, added Lee and company CFO Seth Bagshaw.

Noting the emergence of more 5G handset designs, and this week’s positive outlook from key player Apple, Lee said the cell phone build cycle could be stronger this year than in 2019, when the industry was suffering from something of a hangover induced by an overbuild of manufacturing capacity in 2018.

If that does turn out to be the case, it ought to bring benefits to both ESI and Spectra-Physics, whose systems and sources are used in a variety of phone production process applications.

Debt repayment
For 2019 overall, MKS posted revenues of $1.9 billion, of which $726 million was attributed to sales of photonics-related products from the “Light and Motion” business unit.

That $726 million figure represented an 11 per cent decrease on the prior year, which MKS said was “driven largely by lower shipments to industrial manufacturing customers”.

The softer markets, combined with expenses related to the ESI acquisition and other factors, saw MKS’ annual net income figure shrink from $393 million in 2018 to $140 million in 2019.

Nevertheless, the company retains a cash balance in excess of half a billion dollars, and used some of that to pay off another $50 million of the term loan it used to complete the ESI deal.

Bagshaw noted that MKS was keeping a close eye on its cost structure, as well as taking opportunities to reduce interest payments on its $884 million debt where possible.

“The cumulative impact of our voluntary prepayments and our successful term loan repricing last quarter results in a reduction of our annualized interest expense by over $9 million, based on current interest rates,” he told investors.

Based on current business levels, MKS’ management is expecting sales in the opening quarter of 2020 to be somewhere between $495 million and $545 million.

• MKS Instruments will have a significant presence on the exhibition floor during next week’s SPIE Photonics West event in San Francisco. The company’s Ophir division has also been short-listed for a Prism Award. In the category of “safety and security”, its long-range continuous zoom lens is nominated alongside an industrial camera from Allied Vision and Pendar’s stand-off Raman detector, with the winner in that and eight more categories set to be announced Wednesday February 5.