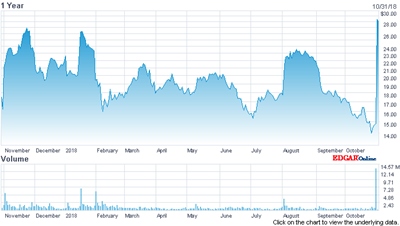 The laser micromachining systems vendor Electro Scientific Industries (ESI) is set to become part of the fast-growing photonics division of MKS Instruments, after the latter agreed to buy the Portland, Oregon, company for $1 billion.

On the same day that ESI posted financial results for the quarter ending September 30, MKS announced that the two parties had signed a definitive agreement valuing ESI at $30 per share. Both boards of directors have approved the deal unanimously.

While ESI shareholder assent and anti-trust approvals are still required, the agreed price represents nearly double ESI’s prior stock valuation. The last time that the company’s stock price was worth more than $30 was way back in April 2002.

Cash-plus-debt deal
Coming two years after MKS closed a $980 million deal to acquire Newport and with it the historic Spectra-Physics laser brand, the addition of ESI will see the Massachusetts technology firm further broaden its already huge scope of product lines.

The move will also shift the company’s overall product offering more towards optics and photonics, helping to further insulate it from the swings in demand that tend to characterize the semiconductor industry.

“We believe the ESI acquisition will help us deliver on one of our long-term strategic objectives, which is to broaden our base as a technical solutions provider to additional customers and markets,” announced MKS’ CEO Gerald Colella.

“We anticipate that the addition of ESI will strengthen our expertise in the photonics and optics markets, enabling us to develop systems that provide rich and robust solutions to meet the challenges of evolving technology needs.”

As with the Newport deal, MKS will complete the all-cash purchase partly through debt financing. If all goes according to plan, that will push the company’s total term-loan debt beyond $1 billion – although MKS should also end up holding net cash and investments in excess of $400 million.

Transformative times
News of the agreement came as ESI reported its latest quarterly financial results. Its CEO Michael Burger, who took over at a difficult time for the company back in 2016 - and when its stock price stood at just $4 - said in a joint release with MKS:

“We believe this combination will provide significant value for ESI’s customers, as well as create exciting opportunities for our employees. Over the years, MKS’ solutions have helped us improve our offerings for the printed circuit board processing market. I anticipate that the continued close collaboration and expertise of these two outstanding companies will create even better and more valuable solutions for our customers.”

For the three months ending September 30, ESI posted an operating income of $19 million on sales of $85.9 million, both figures up strongly on the same time last year but also representing something of a slowdown following an exceptional June quarter.

Founded more than 70 years ago and traded publicly since 1983, ESI currently employs around 600 people and in its fiscal year 2017 delivered a pre-tax income of $76 million on annual revenues of $325 million – something Burger described as a “transformative” year for the firm.

5G opportunity
In an investor conference call to discuss the deal, Colella and his executive team described the MKS and ESI offerings as “highly complementary”, with virtually no overlap. “They’re a systems company and we’re a subsystems company,” noted MKS’ CFO Seth Bagshaw.

The two companies already have a long-standing customer relationship, with MKS’ COO John Lee explaining that the Newport divisions has for several years sold lasers, motion control equipment, and beam-steering optics to ESI.

Part of the rationale behind the deal also appears to be the emerging opportunity presented by the adoption of 5G networking protocols in wireless communications. ESI’s tools are starting to gain traction in the production of electronic components critical for the switch to 5G.

Looking ahead at how the two companies would integrate after the deal is closed, which should happen in early 2019, CEO Colella added: “We imagine taking the capability of our Spectra-Physics [laser] group, and the ‘know-how’of ESI to make some compelling, game-changing systems in the future.

“The ESI technical team has a great understanding of the applications of lasers. And we believe that the combination of these companies, [which] can collaborate at the technical level, can enhance the capability of the lasers coming out of our Spectra-Physics group.”

Newport progress
Asked about the wisdom of moving up the value chain to become a systems provider, Colella pointed to the company’s move into photonics via the Newport deal as evidence of its ability to improve existing businesses.

“When we bought Newport everybody said ‘what did you just do? You just went off into a market with products and customers you know nothing about’,” he recalled. “Today they are at an $800 million run rate after running $600 million for almost four years and 27 per cent operating income versus 10 per cent two years ago.

“And the company is intact and running well. We didn’t know anything about lasers. We had no idea about the applications that they had. I don’t see this as being any different.”

• Following news of the deal, MKS Instruments’ stock price rose by around 4 per cent on the Nasdaq exchange. Trading at around $72, it now commands a market capitalization of around $4 billion.