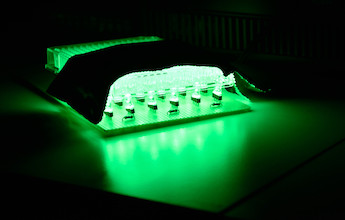 The emerging field of photopharmacology aims to use light as an external stimulus to activate drug molecules, and do so with a high degree of control over the time and place where this happens - a conceptually straightforward task, which in fact requires an interdisciplinary effort across both chemical synthesis and light delivery technology.

Unlike conventional antibiotics, which have a long-lasting presence in the body and the environment leading to antibiotic resistance, and chemotherapy agents, which can easily affect healthy cells as a side-effect of treatment, a molecule whose therapeutic action can be switched on and switched off again by the action of light could have some dramatic advantages.

"Drugs are highly potent bioactive substances whose activity is needed only at the disease site in the body, but which are instead usually active everywhere and all the time," commented Wiktor Szymanski, whose lab at University Medical Center Groningen develops both photopharmacology and related medical imaging technology. "Our modus operandi is to incorporate molecular photoswitches into the structure of bioactive molecules, and in this way make drugs that can be photoswitched between two forms, each of different potency."

This elegant theory poses some challenges. The perfect molecular photoswitch would be a small molecule that readily absorbs light of a certain wavelength to enter an excited state, before isomerizing back to a new ground state with a different shape and properties than the starting molecule. This change influences the activity of a drug into which the switch has been incorporated, before the isomerized form subsequently returns to its original form once again, either by absorbing light of another specific wavelength or by a thermal process.

"Until a few years ago, we only used UV light in photopharmacology," said Szymanski. "This is no problem if the doctor wants to activate a drug before giving it to a patient, but using UV for local activation in the body is harmful to cells and only penetrates a fraction of a millimeter into the tissue. So in recent years chemists have worked on developing molecular photoswitches that can be switched with visible - or even better with near-infared - light, able to penetrate deeper into the body."

Using visible light can mean that the two wavelengths needed to switch the drug on and off fall inconveniently close together, but Szymanski's team recently reported the development of new molecular photoswitches in which the two wavelengths are separated by as much as 100 nanometers, a potentially significant improvement.

Understanding the half-life of the isomerized form of the molecule and the rate at which it reverts to its original form, along with the quantum yield of the isomerization process, has become a key aspect of photopharmacology from a chemistry perspective, alongside the central challenge of synthesizing a molecule capable of adopting two forms of differing potency in the first place.

Meanwhile, the other technology involved in photopharmacology is photonics, given the need for illumination sources that are both capable of effective light delivery to the molecules of interest and ultimately suitable for translation into clinical use. Here photopharmacology can benefit from the previous experience of developers in the field of photodynamic therapy (PDT), according to Szymanski. 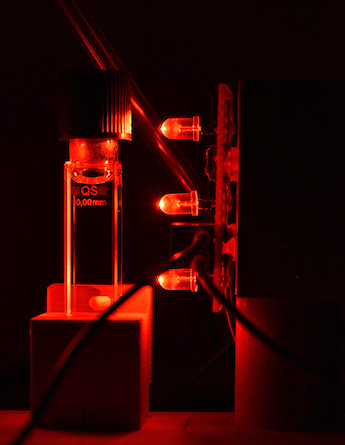 "The PDT sector has faced a parallel challenge already, and we can learn from some of their solutions," he said.

"Some years ago, we sat down with a surgeon in our hospital and started thinking about the feasibility of delivering light to different parts of human body. We categorized those organs that are simple to reach, such as skin and eyes; those that can be reached by irradiating through the skin; those that we can reach through endoscopy without incision, like the GI tract and respiratory system; those that require an incision, including most internal organs; all the way to the 'mission impossible' – brain and bone marrow that are hidden and very difficult to reach with light."

For photopharmacology, the ideal light source would feature high intensity light of suitable wavelength, plus a narrow emission band for hitting the spectral sweet-spots where isomerization of the molecules in both directions is at its most efficient.

"We employ commercial light systems for our current in vitro studies, and LED-based delivery systems which can emit with a FWHM of 10 to 20 nanometers work well for us," commented Szymanski.

"My group has also recently collaborated with Mountain Photonics to develop a dedicated system that allows us to irradiate samples with six different wavelengths in selected order at defined intervals, avoiding the need to do this manually. But of course we ultimately need devices to be approved for pre-clinical and clinical use, which may place constraints on the light delivery platforms used."

Alongside photopharmacology, Wiktor Szymanski's group at Groningen is also involved in the development of medical imaging techniques, and he believes that a healthy synergy exists between the two fields.

One current project in Szymanski's lab applies the molecular concepts behind photoactivation to the construction of liposomes for light-triggered drug delivery, which could allow the process to be followed by MRI. Other techniques such as ultrasound or optoacoustic imaging are also likely to play a role in targeting photopharmacology techniques to desired areas and assessing the results.

"We are very excited about our new molecular photoswitch, which we believe could solve the issue of band separation in the visible range," he commented. "However, we still need to develop new molecular designs with an improved half-life; to better control the isomerization from unstable form back to stable; and to fully study the stability and toxicity of our photoswitches, obvious prerequisites for any clinical translation. But we appreciate these current breakthroughs, small steps towards the big goal: using light to control drugs for safer and more efficient therapies."