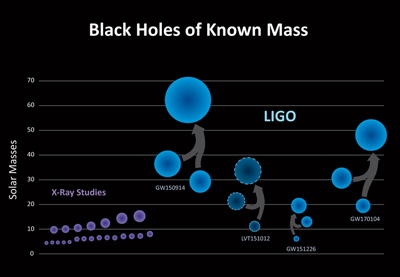 Scientists at the Laser Interferometer Gravitational-wave Observatory (LIGO) have confirmed their third observation of gravitational waves – created by a collision between two black holes some 3 billion light years away.

Though similar to the two previous gravitational-wave events detected since LIGO’s optical system was upgraded to improve sensitivity, the latest observation has revealed a new class of black holes.

3 billion light years
Speaking on behalf of the LIGO scientific collaboration, David Shoemaker from the Massachusetts Institute of Technology (MIT) said: “We have further confirmation of the existence of stellar-mass black holes that are larger than 20 solar masses - these are objects we didn't know existed before LIGO detected them.”

The ripples in space-time generated by the latest cosmic collision were picked up on January 4, just a few weeks after LIGO's current observing run began, with the event officially referred to as “GW170104”. The two previous events were detected in September 2015 and December 2015.

In all three cases, each of the twin detectors of LIGO – one in Livingston, Louisiana, the other in Hanford, Washington state - registered gravitational waves from tremendously energetic mergers of black hole pairs at slightly different times, as the echoes of the collisions rippled across the US.

“These are collisions that produce more power than is radiated as light by all the stars and galaxies in the universe at any given time,” explains the LIGO team. “The recent detection appears to be the farthest yet, with the black holes located about 3 billion light-years away.”

In contrast, the black holes in the first and second detections are located 1.3 and 1.4 billion light-years away, respectively.

Formation theories
The newly discovered black hole ended up with a mass about 49 times that of our sun following the collision. This fills in a gap between the masses of the two merged black holes detected previously by LIGO, which had solar masses of 62 and 21.

There is also a suggestion in the data that the two black holes involved in the January observation were not perfectly aligned - hinting to the collaboration that pairs of black holes could be forming in unexpected ways.

“There are two primary models to explain how binary pairs of black holes can be formed,” reports LIGO. “The first model proposes that the black holes are born together: they form when each star in a pair of stars explodes, and then, because the original stars were spinning in alignment, the black holes likely remain aligned.

Virgo test run
One limitation of the twin LIGO facilities currently is that they are unable to pin-point exactly where in the sky the black-hole collision took place. A third detector location is required to triangulate the origin of the gravitational waves accurately.

Now, following a similar upgrade program to that completed at LIGO, scientists at the “Virgo” interferometer near Pisa in Italy appear almost ready to join the observing run and provide that third detector site.

Virgo Collaboration spokesperson Jo van den Brand said in a release issued by LIGO operator Caltech: “We expect that by this summer Virgo will expand the network of detectors, helping us to better localize the signals.”

And in its own statement, the Virgo team said that a successful test run on the upgraded system was completed in early May, adding: “The sensitivity is improving rapidly and Virgo is expected to soon join the LIGO detectors.”

If and when it is completed, the much longer interferometer arms of the LISA observatory would be able to pick up gravity-wave "ripples" at different frequencies to those heard by LIGO and Virgo, and therefore sense waves created by different types of cosmic events than the three black-hole collisions picked up thus far.