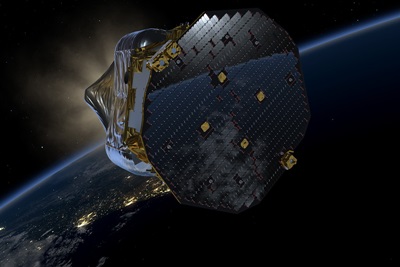 The European Space Agency (ESA) has launched the first payload of a mission designed to test optical hardware for detecting gravitational waves.

The LISA Pathfinder mission, which blasted off from French Guiana in the early hours of December 3 – a day later than had been planned - is the test stage for a laser interferometer system that would put one of the key predictions of Einstein’s General Theory of Relativity to the test.

The equipment on board LISA represents the first “arm” of the future space interferometer, and will test the feasibility of performing distance measurements with picometer-scale resolution at extremely low frequencies.

If this initial test stage goes according to plan, it will form the cornerstone of what would become the largest man-made optical system in space.

The optical bench at the heart of LISA (see image below) was developed by UK scientists at the universities of Glasgow and Birmingham, and integrated with the satellite system just over two years ago.

Interferometer constellation
“LISA” stands for “Laser Interferometer Space Antenna”, and the Pathfinder mission is carrying two identical test masses in the form of reflective 46 mm gold/platinum cubes, each suspended in its own vacuum container.

Back in 2010, ground tests on the Astrium-built payload showed that the optical metrology system (OMS) on board Pathfinder could meet the stringent precision requirements needed to detect tiny “ripples” in space-time that are predicted by Einstein’s theory.

Eventually, LISA is set to comprise a constellation of three spacecraft flying in formation, millions of kilometers apart. Each will carry two test masses that will act as mirrors, reflecting a laser beam emitted by one of the other spacecraft.

If a gravitational wave travels close to the LISA flotilla, the resultant tidal effect should be indicated by tiny changes in the distances between each pair of the independent, free-floating masses. 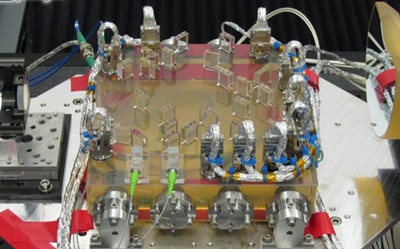 False alarms
Although their existence has never been officially confirmed, Einstein’s theory suggests that huge cosmic events like supernovae, or collisions between black holes, would generate gravitational waves that could be detected with sufficiently sensitive equipment.

Terrestrial systems like the advanced laser interferometer gravitational wave observatory (LIGO) in the US have been searching for just such a signal in recent years, and a couple of months ago rumors began to circle that one had been detected.

However, there have been previous false alarms – most notably in 2014, when what had looked like a breakthrough signal of the Big Bang detected by scientists at the Harvard-Smithsonian Center for Astrophysics turned out to have been caused by galactic dust.

Although systems like LIGO are huge in terrestrial terms, deploying an interferometer in space opens up the possibility of using much longer optical “arms”, with LISA’s designed to be 5 million kilometers long.

LaGrange destination
ESA says that several new technologies have been developed for LISA, first to isolate the test masses from external forces when they get to space, and second to allow for the tiny distance measurements to be performed by an on-board interferometer.

According to the space agency, LISA’s Vega launcher lifted off at 04:04 GMT on December 3. About seven minutes later, after separation of the first three stages, the first ignition of Vega’s upper stage propelled LISA Pathfinder into a low orbit.

Pathfinder separated from the upper stage at 05:49 GMT, at which point the controllers at ESA’s operations center in Darmstadt, Germany, took over.

Over the next two weeks, the spacecraft will propel itself into higher orbits with six burns. The final burn should take Pathfinder to its operational location - orbiting around the stable “LaGrange” virtual point in space known as L1, some 1.5 million kilometers from Earth in the direction of the Sun.