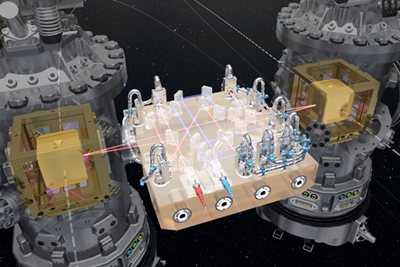 Inside LISA Pathfinder: lasers and masses

The European Space Agency (ESA) says that its planned space-based laser interferometer will be sensitive enough to detect gravity waves, after the first in-flight results from a pilot mission showed excellent noise performance and precision.

A pan-European team of scientists and engineers has just reported those results, from the first 55 days of operation of the LISA Pathfinder mission. In the journal Physical Review Letters (PRL), they show that two test masses, made of gold and platinum and in free fall, can be kept sufficiently free of noise - their motion influenced only by gravity and unaffected by other cosmological forces like the solar wind – to operate as a key part of a future space interferometer.

Researchers from the team at France’s Centre National de la Recherche Scientifique (CNRS) declared “mission accomplished” for the Pathfinder probe, which was launched in late 2015 and currently sits at the stable “L1” LaGrangian point 1.5 million kilometers from Earth.

Meanwhile David Reitze, the executive director of the Laser Interferometer Gravitational Wave Observatory (LIGO) for the California Institute of Technology, described the tests as a “tour de force” in precision measurement that bode extremely well for the planned future observatory.

“Not only were the technologies needed for the future eLISA (Evolved Laser Interferometer Space Antenna) gravitational wave space observatory validated, but the performance of the ESA demonstrator also exceeded the project specifications by a factor of five,” announced CNRS.

Ripples in space-time
Though still many years from being launched, eLISA should eventually comprise three spacecraft carrying technologies tested by LISA Pathfinder. Positioned several million kilometers from each other, they are set to form a huge interferometer in which highly stable lasers will continuously monitor the precise distance between test masses contained within each.

Any gravitational waves passing by Earth would be picked up as a slight change in the distance between the masses, caused by a warp or “ripple” in space-time resulting from distant cosmic phenomena.

That kind of collision was detected on Earth for the very first time last September, when the LIGO instrument in the US picked up unambiguous signals of a collision between black holes. The LIGO team confirmed the findings in February.

The advantage of deploying a laser interferometer in space is that its “arms” can be made far longer than is possible on Earth, meaning that the system ought to be much more sensitive to certain events. On the other hand the technical requirements for launching such technologies into space and keeping them stable on a moving platform are all the more challenging.

The Pathfinder mission, which incorporates an optical bench developed by scientists at UK universities, arrived at its final orbit around the L1 Lagrangian point, on January 22.

CNRS reported: “On 15 and 16 February, the test masses were released from the rest of the spacecraft. Science operations began on 1 March and the level of precision of the project specifications was reached on day one.

“Performance gradually improved, in particular due to the spacecraft attaining its operating temperature and to the release of residual gas. The scientists took advantage of this to observe very precisely the residual forces acting on the test masses, which proved to be less than the threshold required to measure gravitational waves. Operations are expected to continue until the end of June 2016, with a possible extension until April 2017.”

Noise runs
In the PRL paper just published, the ESA-led team reports that a series of 11 “noise runs” carried out over the first 55 days of operations all ran smoothly. “We note that the performance of this interferometer is significantly better than required for the local test mass interferometer readout in LISA,” they wrote.

The science team added: “The system has proven to be extremely stable, reliable, and robust, never falling out of the science measurement mode and with continuous, 100 per cent duty cycle data stretches limited to two weeks only due to maneuvers needed to maintain the L1 orbit.”

They also say that the performance attained is already at a level that will enable implementation of a successful gravitational wave laboratory in space; something expected to have far-reaching consequences for a field already boosted by the recent LIGO discovery.

“If transferred to the LISA observatory configuration, the acceleration noise performance already achieved on LISA Pathfinder would allow for an observatory performance very near the original LISA mission goals,” concludes the paper.

The team calculates that collisions between relatively heavy black holes would generate gravitational waves yielding a signal-to-noise ratio of 1400, and added:

“The LISA Pathfinder performance is therefore fully in line with the mission concept put forward in ‘The Gravitational Universe’ [the eLISA blueprint], which was selected by ESA for the third large mission of the Cosmic Vision programme. LISA Pathfinder represents a major step forward in demonstrating the proposed measurement concept.”

“Tour de force” in precision measurement
Reitze explained in a post on the American Physical Society web site how the Pathfinder mission was designed to test many of the key technologies needed by LISA.

He also points out that it is impossible to detect those kinds of signals on Earth, because they are overwhelmed by terrestrial sources of low-frequency noise.

To meet its astrophysical goals, the arms of the eLISA interferometer will need to be 2 million kilometers long, and sensitive to a displacement of just under a trillionth of a meter.

Reitze wrote: “The results reported by the Pathfinder team are, quite simply, a tour de force in precision measurement. LISA Pathfinder greatly exceeds the mission requirements set for “differential acceleration noise” (essentially the frequency-dependent residual acceleration between the masses).

“But by far the most impressive result is that Pathfinder exceeds the LISA noise requirement over the high-frequency range above 10 mHz and comes close (within 25 per cent of the requirement) over much of the low-frequency range.

He concluded: “These results bode extremely well for the future LISA mission. Although LISA will use different techniques for performing interferometry, the Pathfinder experiments firmly establish that the precision needed by LISA for measuring test-mass displacements are well in hand, setting the stage for the next era in gravitational-wave detectors.”