New system is aimed at optical stimulation and neuroscience in large animal models. 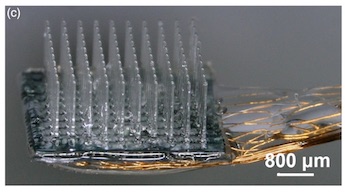 Optogenetics, the technique in which light is used to either stimulate neurons to fire or prevent them from doing so, has had a dramatic impact in studies of the brain and behavior, but delivering that light to localized volumes within the brain has always been challenging.

A project at the University of Strathclyde and the University of Utah, supported by the NIH BRAIN Initiative Program, has now developed an electrically addressable array capable of delivering light to 181 sites in the brain, each providing sufficient light to optogenetically excite thousands of neurons in vivo.

This platform could be particularly valuable for use in large animal models and primates, an area where the need for suitable new light delivery systems is said to be particularly clear. The work was published in Neurophotonics.

The new system builds on an established architecture termed the Utah optrode array (UOA), designed to be manufactured using standard semiconductor and microelectronics packaging technologies. A UOA form factor allows the coupling of light into intracortical brain regions with good spatial control, but relies upon optical delivery systems such as spatial light modulators or digital light projectors, tethered to the array.

In Neurophotonics, the team describes an approach in which the glass needle array is instead directly coupled to a custom made microLED array, to produce a more compact and lightweight device.

"Coupling LED light into a multimode waveguide such as the UOA is challenging and, without complex lens systems, low coupling efficiencies are to be expected," noted the team, led by Keith Mathieson at Strathclyde. "We comprehensively model the system to maximize the efficiency of coupling, and develop a prototype for testing of the optical throughput and beam profiles."

The fabricated device is an array of glass needles, each measuring 1.5 millimeters in length and spaced at 400-micron pitch. A custom-designed and microfabricated microLED chip, fabricated from GaN-on-sapphire wafers, is bonded directly to the backplane of the glass needle array.

The integrated nature of this electrically addressable architecture could potentially allow wireless control, opening the technology to wider neuroscience applications, and the fabrication process is said to be highly scalable.

Commenting on the research, Anna Wang Roe of the Oregon National Primate Research Center's Division of Neuroscience said that the development of a large array multisite optical stimulator is a significant advance in the field of optogenetics and optical stimulation.

"Having this array will lead to the ability to stimulate multiple cortical sites simultaneously or sequentially, in a cell-type specific manner," she said. "It may also open up the possibility of stimulating with different wavelengths, and therefore different cell types, at selected locations. This capability broadens the menu of possible stimulation paradigms for brain-machine interface."