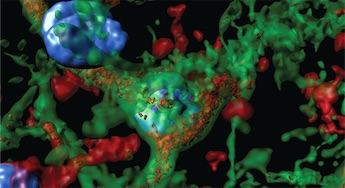 A team at Scripps Research, the medical research institute headquartered in San Diego, has employed lasers to counter the desire to drink in alcohol-dependent rats, potentially opening a route to achieving the same result in humans.

The project used its laser to temporarily inactivate a specific neuronal population in the animals, reversing alcohol-seeking behavior and reducing the physical symptoms of withdrawal. The findings were published in Nature Communications.

Although the laser treatment is far from ready for human use, the team believes that identifying these relevant neurons could allow the development of drug therapies or gene therapies for alcohol addiction.

"This discovery is exciting, and means we have another piece of the puzzle to explain the neural mechanism driving alcohol consumption," said Olivier George of Scripps Research. "We now need compounds that are specific to this neuronal circuitry."

The research builds on earlier studies at Scripps which identified the relevant ensemble of connected cells in the central nucleus of the amygdala. This finding marked major progress in mapping the brain, but the researchers needed to characterize the identity of the neurons in this ensemble.

Doing so required a means of testing the role of a subset of the neurons called corticotropin-releasing factor (CRF) neurons, and determining if they were the key drivers of a craving for alcohol.

The team did so using optogenetics, a technique for manipulating genetically tagged cells with precise bursts of light which enables particular neurons to be either induced to fire or prevented from doing so by the action of a laser. In this case, 532-nanometer light delivered into a mouse brain via an implanted optical fiber was used to optogenetically affect the firing of the CRF neurons and assess the change in behavior.

Tests found that laboratory rats already showing symptoms of alcohol addiction lost the motivation to drink when the CRF neurons were inactivated. They also showed reduced physical symptoms of withdrawal, such as abnormal gait and shaking.

Stopping the laser treatment caused the animals to return to their previous behavior, suggesting that the effect was reversible.

The next steps for the project will involve a closer look at the signaling pathways in the brain affected when the CRF neurons are deactivated. If reduced drinking is tied to the CRF neurons that send projections to reach another brain region called the bed nucleus of the stria terminalis, as the team believes, then other projections from these neurons may have different roles in alcohol addiction.

After that, the work may point towards similar ways to reduce reliance on other substances, perhaps including opioid addiction. It also adds to the potential impact of optogenetics, a field pioneered by Karl Deisseroth and Ed Boyden which has already made significant strides in understanding behaviors such as the thirst mechanism, cocaine consumption, and reward-seeking on the neuronal level.

"These results identify a critical neuronal ensemble for addiction-like behavior," commented the project team. "They suggest that the neural pathway could be targeted for the treatment of excessive drinking in alcohol use disorder."