Hyperspectral imaging is one of the fastest-growing segments of the analytical instrumentation market. David Bannon, chief executive officer of Headwall Photonics, tells Marie Freebody about the commercial potential of this next-generation technology.

David Bannon co-founded Headwall Photonics (Fitchburg, MA) in 2003, through a divestiture from Agilent Technologies. Bannon has since transformed the company from a components business into a thriving instrumentation vendor that is focused on product innovation in hyperspectral and Raman imaging. 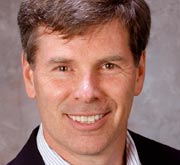 What is hyperspectral imaging?
Hyperspectral imaging is a technique that allows users to simultaneously measure and rapidly analyse the spectral composition of all objects within the field of view of the instrument. These imagers are now being deployed in a broad range of commercial and industrial applications where high speed, in-line inspection and enhanced quality control are essential.

Traditionally, capturing precise spectral information for process-manufacturing applications has involved either simple machine vision or single-point spectral instruments deployed in-line or at-line. These systems are a costly option as they are only capable of sampling a very small area of the overall product, resulting in poor sampling rates.

Hyperspectral imagers, on the other hand, allow a much greater percentage of the object to be analysed. They can also generate the chemical composition or spectral signature for any object or any point within their field of view. What's more, the image scene can be colour-rendered for the presence or absence of materials based on established spectral libraries.

What are the main applications?
There are three distinct waves of technology adoption, each focusing on a different set of applications. In the late 1980s and early 1990s, hyperspectral technology was deployed primarily as an airborne technique for environmental remote sensing, as well as for military applications such as reconnaissance and surveillance.

Over the past 10 years, hyperspectral technology has been adopted for many commercial applications such as food inspection and safety, quality control of flat-panel screens and increasing pharmaceutical production yields.

The next wave of adoption is currently under way in biotechnology, life sciences and medicine. In this context, Headwall's Hyperspec instruments are being used in laboratories to detect skin cancer and being attached to microscopes to aid with drug discovery and cellular spectroscopy.