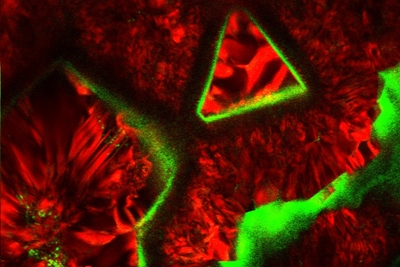 by Ford Burkhart in San Diego
A dazzling new way to look inside a gemstone, without making so much as a scratch, delighted the audience at a special “light in nature” conference session at SPIE’s Optics + Photonics meeting in San Diego.

The non-invasive, non-destructive 3-D imaging technique employs a multiphoton microscope, used for the first time ever to probe gemstones, said speaker Benjamin Cromey, a graduate student at the University of Arizona’s Wyant College of Optical Sciences.

Probing depths around the thickness of a credit card, it produces a series of colorful “landscapes”, indicating the topography of the crystals under investigation.

Crystal structures
Deploying 100 femtosecond fiber laser pulses with an average power of around 50 milliwatts, Cromey and colleagues used the kit to look at samples provided from dealers at the annual Tucson Gem & Mineral Show. He probed the precious stones to a depth of about 2 mm, with sub-micron resolution.

Can the novel approach spot a fake gem? “It’s too early to say,” he said. “We are working to figure that out.” For now, he is concentrating on characterizing the gems, discovering more about their structures and how they were formed - the kind of knowledge sought by geologists. In fact, Arizona’s Department of Geosciences has co-sponsored the latest work.

“We usually use the multiphoton microscope to look at things in the biological world,” Cromey said. “This application is what reaches over to the geosciences.”

Of course, optical devices have long been used by geoscientists to evaluate gems. An 1895 paper on how to distinguish between precious stones cited the “scratch test”, and mentioned such devices as the spectroscope and dichroscope, along with the goniometer which measures angles between faces on a crystal.

“We are observing and characterizing nonlinear optical properties,” Cromey said, “and that provides very useful information for a geologist.”

Admitting that he began the work on something of a whim, Cromey added: “Then I started discovering these amazing images. This is label-free imaging with no stains or anything like that.” The group's latest work is funded by the National Science Foundation.

And by using a multiphoton technique, some interesting stuff happens. “You begin to see inside the materials, to see the crystal structure,” explained Cromey. “With the third harmonic generation, you see between the boundaries of the different materials.”

One series of images showed a rare blue lace agate from Botswana (see above). Another showed several birthstones - emerald; aquamarine, red topaz, and peridot. Cromey highlighted grayish images captured using white light, and then the colorful structures brought out with the second- and third-harmonic generation. It was, he said, “pretty exciting.”