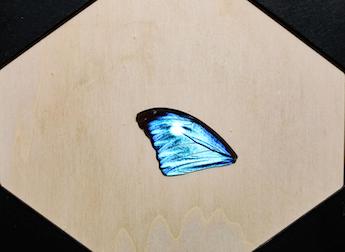 Effective visual rendering of real-world objects in graphical or animated form depends upon accurate knowledge of how light interacts with, and is reflected by, the material in question, so that its behavior can be accurately recreated.

A key parameter is the bidirectional reflectance distribution function (BRDF), a four-dimensional value defining how light is reflected at an opaque surface as a function of both illumination and viewing geometries.

Datasets of real-world BRDF measurements for different materials are currently limited, not least because the process of scanning a four-dimensional domain at sufficient resolution and recording the relevant results can be a very time-consuming process.

A project at the Swiss research institute EPFL has started to tackle this hurdle, setting itself the goal of digitizing the visual appearance of "all natural and synthetic materials in the world," and building the biggest-ever database of relevant parameters.

"Our goal is to put together a very comprehensive library of materials—not just to recreate them, but also to understand mathematically what makes them look the way that they do," said Wenzel Jakob of EPFL's Realistic Graphics Lab (RGL).

The project will make use of hardware and software developed at RGL, including the lab's customized goniophotometer and computational software tailored specifically to assist rapid BRDF acquisition.

RGL's goniophotometer simultaneously illuminates and observes a vertically mounted sample from arbitrary directions using a set of four motorized axes, while illumination arrives from a static light source installed in an adjacent room partition, with the illumination direction being controlled by rotating the sample mount.

“A conventional camera only records red, green and blue color information that is visible to the human eye," commented Jakob. "We instead use a spectrometer that records hundreds of wavelengths throughout the entire visual spectrum, extending even to UV and infrared. That wealth of data provides us with much more information about a material that enables us to simulate its appearance extremely precisely."

According to RGL data, the sensor head revolves around the sample at about 3 meters per second, acquiring measurements at a frequency of 1Khz with an angular precision of 1 mrad or around 0.06 degrees.

Analyzing the optical data recorded involves RGL's bespoke software, developed to automatically adapt to the behavior of a material by warping the underlying 4D domain so that most of the volume maps to regions where the BRDF takes on non-negligible values, while irrelevant regions are strongly compressed. One immediate result of this adaptation is that the data acquisition time is significantly reduced.

In a 2018 paper describing the computational method, Jakob commented that the availability of BRDF datasets such as the one proposed by EPFL was timely, given current attention being paid to rendering of spectral data in several industrial contexts. An eventual comprehensive spectral dataset built up by the project will enable future advances in the area of material modeling and other sectors, according to EPFL.

RGL's initial dataset is said to contain materials with spectrally interesting behavior, including multiple types of iridescent, opalescent, and color-changing paints. The project commented that other materials initially appearing to be well-described by geometric optics can exhibit oscillatory behavior in the spectral domain, indicating wave-optical interference, and these will now be studied further by the project.

"This kind of material data is invaluable in areas like architecture, computer vision, or the entertainment industry," he said. "We've recently started working with Weta Digital and Industrial Light & Magic, who make movies like Avatar and Star Wars."