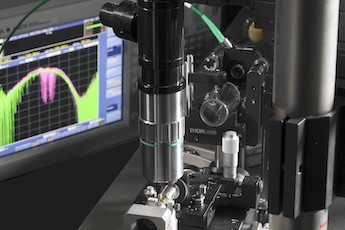 Laser sources in the middle-IR spectral range of 3 to 5 microns wavelength are potentially valuable for a number of spectroscopy and sensing applications.

The wavelength band includes not only an atmospheric window, within which certain wavelengths can pass through the atmosphere without absorption and re-emission, but can also be used to identify several molecules of biological interest, including hydrocarbons and greenhouse gases.

Supercontinuum light within this range is particularly useful, and research into generating such spectra from glass optical fibers has been underway for some time. Success has been limited, however, due to the relatively low efficiencies achieved and difficulties miniaturizing the procedure down to the chip-scale devices that would be most useful.

A project at the Swiss research lab EPFL has now made a potentially significant step forward, by demonstrating how a large cross-section waveguide pumped with a femtosecond fiber laser source can generate light in this spectral range with improved efficiency and useful power levels. The work was published in Nature Communications.

"This device sets a new benchmark for efficiency," said Davide Grassani of EPFL. "This is the first time anyone has created a fully integrated spectroscopic laser source. It does away with the painstaking process of precisely aligning all the parts in a conventional laser system."

The breakthrough builds on earlier research at EPFL into the use of silicon nitride waveguides pumped by erbium-doped fiber lasers as a means to generate mid-IR light. Such systems have to date tended to show low conversion efficiencies and limited power around the 3 micron wavelength of particular interest.

The Swiss team tackled the problem by leveraging recent advances in fiber laser technologies, which allowed it to shift the laser's emission wavelength closer to the limit of the silica's absorption edge at 2.1 microns. It also exploited the ability to design waveguides of increasingly large cross-section.

By judging both the pump laser and the waveguide design correctly, the system could efficiently convert a commercial short-wave IR femtosecond fiber laser source into on-chip generated mid-IR output, and do so at efficiency levels said to be in excess of those recorded previously.

"Record conversion efficiency, defined as on-chip generated mid-IR power over on-chip coupled pump laser power, as high as 35 percent is reached at 3.05 microns, and close to 20 percent at 3.95 microns, corresponding to more than one milliwatt average power at the chip output," commented the team in its published paper.

In trials, the source was successfully employed for detection of acetylene by absorption spectroscopy, by coupling the light from a waveguide 1000 nanometers wide directly to a 108 centimeter gas cell. Absorption dips from the acetylene were clearly detected.

"This can lead to a very efficient, compact, and easy to use device for coherent mid-IR light generation," noted the team. "The device can cover the 3 to 4 micron region, which hosts the signature of important greenhouse gases like methane and nitrous oxide. In addition, this approach provides a power level sufficient for spectroscopy applications, bridging the gap between fiber sources and quantum cascade lasers, which are the workhorse of mid-IR spectroscopy devices."