System designed to defeat drones and other threats with combination of laser and microwave technologies. 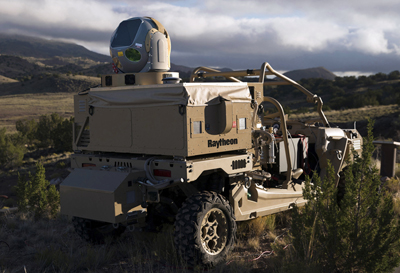 On patrol: Raytheon's mobile high energy laser looks out into a wide-open sky.

"These threats aren't going away, and in many instances, shooting them with a high energy laser weapon system is the most effective and safest way to bring them down." The contract follows successful demonstrations of Raytheon's directed energy systems for the Air Force and the U.S. Army

Raytheon, headquartered in Waltham, Mass, USA, with 2018 sales of $27 billion and 67,000 employees, is a technology developer specializing in defense, civil government and cybersecurity solutions. With a history of innovation spanning 97 years, the firm provides state-of-the-art electronics, mission systems integration, defense products and services, and mission support for customers in more than 80 countries.

The following video presents key aspects of Raytheon’s patented laser technology and explains how its precision targeting are paving the way for countering unmanned aerial systems and other threats: