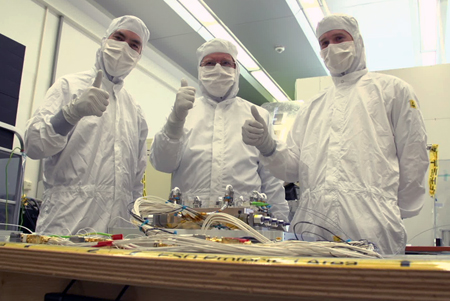 The LISA Pathfinder – an international technology demonstrator to pave the way for the eLISA spaceborne gravitational wave observation mission – last month reached another key milestone: its heart, the optical bench, being developed at the University of Glasgow, UK, has been integrated into the core assembly of the satellite.

The optical bench was built and tested at the Institute for Gravitational Research (IGR) in Glasgow. Since its delivery from IGR to Astrium, Germany, it has been retested and integrated into the LISA Technology Package, the satellite´s core that will prove key technologies for the eLISA mission, which is due to lift-off in 2015.

Lead scientist Dr Christian Killow (Scottish Universities Physics Alliance Advanced Fellow) told optics.org, “It is rewarding to see our CAD models turning into real hardware. The completion of the optical bench is the culmination of several years of work at Glasgow and we have created something that had not been realized before. It was challenging on many fronts: it shows that we can build this type of optical sensor that can be used in space missions, such as eLISA.

”This has been a challenging design and construction task even without having to anticipate the launch conditions; we have had to achieve picometer sensitivity in the millihertz regime to ensure that the sensor achieves its goals; at low frequencies it’s very hard to keep devices stable at this level.

“The two beams that leave the optical bench needed to be aligned to virtual reflection points to better than 25µm. To do this we further developed the hydroxide catalysis bonding technique to precisely bond optics with sub-micron precision.

"We can bond various devices and materials whether they are silica, piezoelectric, silicon carbide or others and the industrial bonding technique would is be transferable to industrial processes. There could certainly be new applications for the technology approach that we have refined."

Prof. Karsten Danzmann, director at the Max Planck Institute for Gravitational Physics and head of the Institute for Gravitational Physics at the Leibniz Universität Hannover, commented, "Getting LISA Pathfinder’s core measurement technologies ready to go operational means that we have just completed another crucial step. We are now firmly on course for a launch in 2015."

The next major phase of the project will be producing the final documentation – crucial because the ongoing integration of the optical bench will be performed by different teams. Additionally, the documentation will enable the operations centre to interpret the received data during the forthcoming space mission. 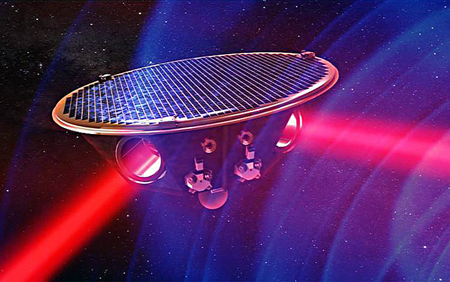 LISA Pathfinder is an ESA test mission to prove technologies for gravitational-wave observations.

LISA Pathfinder is a European Space Agency (ESA) technology test mission aiming to prove essential key technologies for future space-based gravitational-wave observatories, which cannot be tested on Earth. For this purpose, one laser arm of a planned large gravitational wave mission, like eLISA (evolved Laser Interferometer Space Antenna), is reduced from millions of kilometers to just 40cm to fit into a single spacecraft.

LISA Pathfinder is paving the way for a large-scale space mission designed to detect one of the most elusive phenomena in astronomy – gravitational waves. Extreme precision is required to detect the tiny ripples in the fabric of space and time predicted by Albert Einstein.

Killow explained the benefits that a greater understanding of gravitational waves could bring: “Regular observation of gravitational waves will lead to a new sort of astronomy. Conventional astronomy has so far been based on looking at the electromagnetic spectrum, but measuring gravitational waves is akin to listening to what is out there, so it is very likely that we will have a new perception of the universe; there is a huge amount of new science that will be returned from this project."

”Gravitational waves measured by a large mission in space will allow us to e.g. trace the formation, growth, and merger history of massive black holes. Also it will enable us to confront General Relativity with observations, and it will probe new physics and cosmology with gravitational waves."