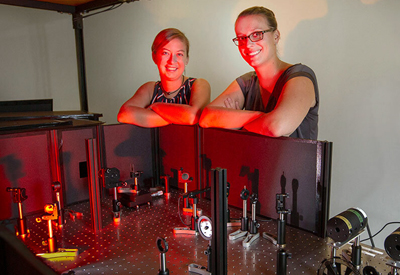 Innovative, new ways for solar cells to absorb and use infrared light, a portion of the solar spectrum that is typically unavailable for solar cell technology, have been researched by a team of Florida State University researchers.

Their work is published in two studies in the journal Matter and the Journal of Physical Chemistry Letters, respectively.

"We're working on a process to optimize the efficiency of solar cells," commented Assistant Professor of Chemistry and Biochemistry Lea Nienhaus. "The main drive is to optimize this process for solar applications."

Nienhaus and postdoctoral researcher Sarah Wieghold have developed a new approach for making solar cells to facilitate a process called photon upconversion. In this, two-low energy photons are converted into a single high-energy photon that emits visible light.

Typically, these devices have used metal-organic molecules or semiconductor nanocrystals to sensitize photon upconversion, but Nienhaus and Wieghold used a thin-film of lead-halide perovskites. The perovskite is coupled with a hydrocarbon called rubrene, which emits the upconverted light.

The idea behind this process is to create more efficient solar cells that can detect and utilize infrared light. Wavelengths in the infrared spectrum do not have enough energy needed to excite the electrons in a typical solar cell and therefore aren't a viable source of energy.

"That means there is a large amount of the solar spectrum that can't be absorbed by a solar cell," said Nienhaus. "We want to turn infrared light into a wavelength that could be seen and used by a solar cell."

To improve the device efficiency, the researchers needed to create a perovskite film that was just the right thickness. They tested films that were 20, 30, 100 and 380 nanometers thick. When the thickness was above 30nm, the upconversion process became efficient under solar conditions.

"To optimize the device performance, we changed the thickness of our absorber—the lead-halide perovskite film," she said.

While Nienhaus and Wieghold were running the tests, they also discovered that the devices behaved in an unusual way – although the device was turning the infrared light into visible light, the perovskite was also reabsorbing some of the visible light created in the upconversion process.

"There's a tradeoff to using the perovskite film," said Wieghold said. "More visible light created in rubrene doesn't mean more light coming out of the device, which is counterintuitive."

As a result, further work and more detailed device engineering is required to optimize the ratio of infrared light in, versus visible light out of the device, researchers said.