System developed under 'UTOFIA' European project works in murky waters to depths of hundreds of meters. 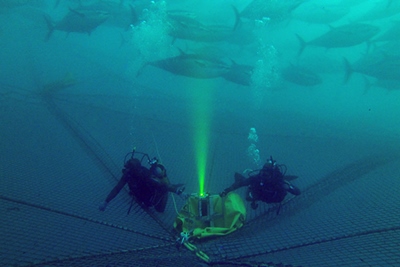 Range plus field of view in murky waters

Developed under the €5.7 million “UTOFIA” project, part of Europe’s Horizon 2020 innovation program, the camera is being described as a “game-changer” for maritime applications.

After three iterations during the course of the project – reducing system size by a factor of six while quadrupling laser power - it will now be commercialized by Marseille-based Subsea Tech, one of seven partners that took part in the three-year effort that officially ended in April 2018.

Low-cost time-of-flight
The system is said to use a combination of innovative technologies to obtain clear images in low-visibility environments, overcoming the problem of back-scatter caused by light reflecting off particles suspended in the water.

Instead of using a continuous-wave source of light, the UTOFIA system emits nanosecond laser pulses that are range-gated by an optical shutter and simple camera sensor to yield time-of-flight data, enhanced by software capable of distinguishing any back-scattered noise.

“The use of range-gating to reduce back-scatter was previously limited to very high-cost, highly complex systems,” says the team, which last year tested the system at a tuna farm off the Spanish coast. “UTOFIA is the first system to achieve range-gating using a CMOS sensor, common to most digital cameras, enabling a much more cost-effective and compact system.”

The aquaculture tests carried out during the project are said to have showed “highly promising” results both monitoring fish stocks and as part of a navigation system for autonomous underwater vehicles.

In its final newsletter report for the project, the UTOFIA team described the tuna farm test as “very successful”, with the system able to size tuna at different distances - something that is not possible with a stereoscopic camera. Other tests took place in Norwegian and Danish waters.

Full-field, real-time imagery
According to a European Commission report on the effort, those applications and others are being explored further in a number of follow-up projects. These include “BIOSYS”, which will use the system to monitor stocks at salmon farms, and “SMARTISH”, which will develop an automated version to reduce the amount of fish discarded by trawlers.

Other plans include developing applications for fishing tuna, and exploring other potential uses, perhaps even for space exploration.

Among the partners to provide photonics expertise in the UTOFIA project were the Italian laser developer Bright Solutions, and UK-based Rockwell Automation subsidiary Odos Imaging.

In a detailed report on the second prototype system deployed during the project, the team wrote that the 200 picosecond timing jitter of the diode-pumped green Q-switched source - mostly caused by noise in the trigger circuit rather than the laser itself - was sufficiently low for effective operation, although it could still be improved.

Project coordinator Jens Thielemann from Norway’s SINTEF summed up the progress made under the project, saying: “Before UTOFIA there was no real full-field, real-time 3D technology available on the market with a range of several meters. Existing approaches either provided an incomplete image, or had a limited 3D viewing range.

“UTOFIA has opened up a new underwater imaging approach that will expand the market for underwater surveillance in areas such as marine science, public sector environmental monitoring, commercial fisheries, underwater archaeology, and all kinds of sub-sea technologies - including autonomous vehicles.”