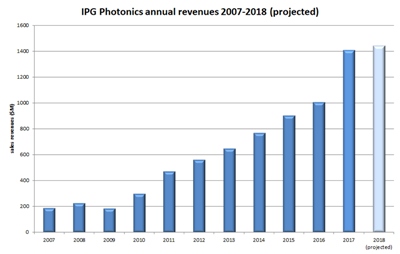 Despite confirming a dip in quarterly sales resulting from the US-China trade war and negative currency effects, the fiber laser company IPG Photonics is confident of a return to form next year.

In the three months ending September 30, the Oxford, Massachusetts, firm posted a net income of just over $100 million on sales of $356 million. Both figures were down on the same period last year, as sales to China and Europe dropped 9 per cent and 25 per cent respectively.

Growing competition
Blaming geopolitical and macroeconomic effects for that slowdown, CEO and founder Valentin Gapontsev described the quarter as "challenging", but also highlighted the positives of record-breaking unit shipments of ultra-high-power lasers and IPG’s introduction of a compact new 20 kW cutting laser. He said:

“We believe our progress in higher-power solutions and new products will help us emerge from the current downturn in a stronger competitive position with greater opportunity to address the growing market for laser solutions.”

In sharp contrast to the Chinese and European picture, sales to North America jumped by nearly 30 per cent year-on-year, thanks to strong demand across cutting, welding, and government applications.

In a conference call with investors, Gapontsev and IPG’s CFO Tim Mammen both commented on an increased level of competition at the lower-power end of the market.

That could be a reference to Vancouver-based nLight, which launched a small-form-factor 10 kW laser at last week’s EuroBlech sheet metal industry trade show in Hanover.

IPG’s response to the growing competitive threat has included the introduction of new “ultra-compact” 1-3 kW sources - also launched at EuroBlech - and other products designed specifically for the Chinese market, where competition is most intense.

Battery order
At the higher-power end of the market, traditionally dominated by IPG, Gapontsev reported that the company’s largest OEM customers were now migrating to its 12 and 15 kW lasers.

Despite also reporting increased pricing pressures at the lower-power end of the market in China, exacerbated by the current slump in demand, Mammen noted that IPG recently booked its largest-ever order for lasers to be used in battery production.

And although the current slump has also affected demand from consumer electronics applications, Mammen sees positives in this area too. “Past investment cycles for consumer electronics have materialized every other year, which would suggest that we should see better performance in 2019,” he said. 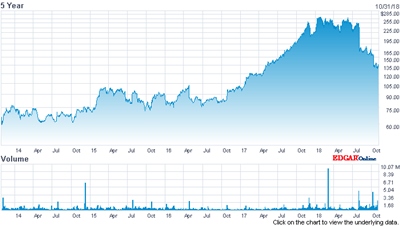 Before that, however, sales in the final quarter of the year will remain characterized by the lower level of demand. Mammen and Gapontsev are predicting that Q4 revenues will come in at between $300 million and $330 million, meaning annual sales of around $1.45 billion that will represent only a small increase on last year’s total.

• That outlook appeared to go down well on the financial markets, as IPG’s stock price closed 8 per cent higher following the results release and investor call. Trading at around $142 on the Nasdaq exchange, IPG remains well below the record highs reached in January 2018, with the company’s market capitalization now standing at close to $7.6 billion.