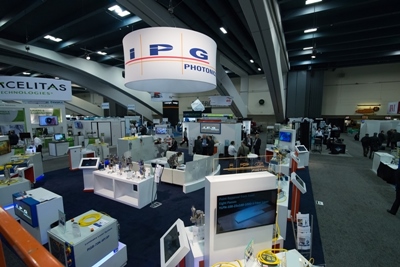 Executives at the fiber laser giant IPG Photonics say that they are seeing “definitive” signs of recovery in the key Chinese market, after several months of sluggish demand.

IPG’s CEO and founder Valentin Gapontsev reported Q1 2019 sales of $315 million – down from $360 million a year ago, even with the inclusion of $24 million in sales from new acquisition Genesis this time around.

A major part of the reason for that drop was a 24 per cent year-on-year decline in Chinese sales, impacted by a weak manufacturing environment and macroeconomic tensions stoked by the US-China trade row.

But that situation appears to be changing. “During the quarter business trends improved in China, driving sequential growth in orders,” Gapontsev said, adding that IPG had registered sequential order growth and “good momentum” over the past few weeks.

And while competition and pricing pressure in China remains as fierce as ever when it comes to relatively low-power lasers, IPG’s development of more powerful laser diodes and some advanced features are said to be maintaining the Oxford, Massachusetts, firm’s ability to compete and retain high profit margins.

IPG’s CFO Tim Mammen commented: “Within China, sales of ultra-high-power CW lasers grew by a double-digit percentage, but were more than offset by declining sales of lasers for lower-power applications.”

New diode aid margins
He and Gapontsev highlighted how IPG’s advances at the diode level have enabled an order-of-magnitude reduction in the effective cost of diode output power over the past six years. The resulting cost savings, including knock-on effects like smaller form factors and less need for fiber splicing, have enabled the company to become more competitive without dragging down margins.

“Nobody can compete with this,” reasoned Gapontsev in an investor call to discuss the latest results, with the CEO going on to claim that rival claims of 10 kW fiber laser capability were largely reliant on marketing “tricks”.

Overall, IPG is witnessing a continued shift in demand to higher-power lasers, with some customers now starting to migrate to 20 kW continuous-wave sources that will support faster cutting of metal. "Sales of lasers at 10 kW or greater increased more than 40 per cent year-over-year,” noted Mammen.

And although revenue from sales of pulsed lasers were also down overall, the IPG team highlighted that demand for its new green and ultrafast fiber lasers was sharply up. The company’s six-color system for cinema laser projectors is also feeling market traction, with several leading providers said to be in the process of accepting the technology.

Limited visibility for 2019
With the recovery in China seemingly under way, and demand in Europe said to be stable, Mammen and Gapontsev predicted that sales in the second quarter of the year would rise to between $340 million and $370 million. That would compare with the record-breaking total of $414 million posted in Q2 last year.

The two executives were not prepared to give an outlook for the full year, however. “Commentary from our largest machine tool OEM customers continues to improve, but we do not yet have clear visibility into their full-year order plans,” Mammen told investors.

In 2018 IPG posted full-year sales of $1.46 billion, after its ninth consecutive year of sales growth since the total dipped below $200 millon in 2009, in the wake of the global financial crisis. That decade-long trend appears to be under threat, depending on the strength of the anticipated second-half rebound.

• In early trading on the Nasdaq exchange following the update from IPG, the company’s stock price appeared stable, dropping a couple of percentage points to around $170. That price, equivalent to a market capitalization of close to $9 billion, represents a solid recovery since late last year, and compares with its all-time high of just over $250 that was reached in early 2018.