Latest progress on Fraunhofer-led project for electric vehicle production to feature at LASER World of Photonics. 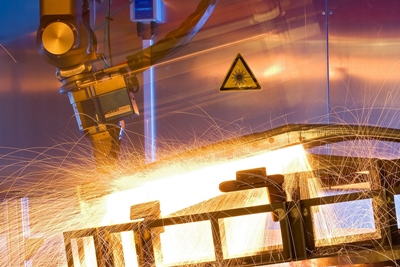 Visitors to the LASER World of Photonics event in Munich later this month will get an idea of how in the future a single laser machine will be able to perform cutting, welding, and additive manufacturing procedures.

The multi-functional tool, under development through a project led by the Fraunhofer Institute for Laser Technology (ILT) in Aachen, Germany, is said to be aimed at SMEs in particular, and a key application area is expected to be electric vehicle production.

Other partners involved in the “MultiPROmobil” effort, which kicked off in late 2018 and is backed by both European and local funding, include Bergmann & Steffen, CAE Innovative Engineering, and the Laser Processing and Consulting Centre (LBBZ).

Flexible fabrication
ILT’s Dirk Petring, who is co-ordinating the effort, says that the rapidly changing demands of the automotive industry require new and more flexible tools for manufacturing.

“In the future, this head will not only enable users to integrate cutting and welding but also to additively generate structures,” predicts the team.

In fact, the combination laser head - provided by Aachen firm Laserfact - has been under development for a few years. The additive process already works with a replaceable nozzle module, and the project partners are currently working to optimize the combination laser head in such a way that it can execute all of the three key processes “on the fly”, and without any need to change either nozzles or optics.

Robot integration
In planned tests at an industrial environment provided by project partner LBBZ, the laser is set to be integrated with a robot combining all three manufacturing disciplines to produce vehicle structures.

Initially, that will involve designing and cutting the triangular control arm (part of the suspension mechanism) of an electric vehicle. It will then be welded and reinforced with additive structures by the multi-functional laser robot cell, all without the need for a single tool change.

The MultiPROmobil project partners predict that the approach will both increase engineering efficiency and reduce startup times by around one-third.

Unit costs and resource consumption should also fall by at least 20 per cent, they add. “With agile, laser-based manufacturing, process chains for the production of sheet metal assemblies can be made very flexible and scalable, so that they can be gradually introduced into electromobility applications,” Petring added.

To some extent the technology is already being used by industry. One example is for cutting and welding strip ends in coating and inspection lines used in steel production, as well as for making high-precision metal assemblies.

But with further development of the combination laser head, the approach is expected to appeal to small- and medium-sized companies that are involved in electric vehicle production.

• Visitors to the LASER trade fair can find out more about the three-year MultiPROmobil project and other developments within Fraunhofer ILT at booth 431, in Hall A2.