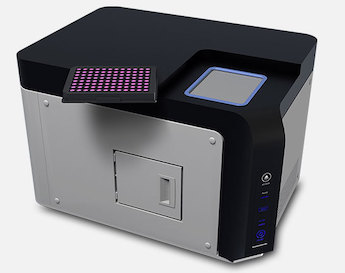 A new 3D fluorescence scanning platform christened Zyncscan by its developer Hamamatsu is being brought to market in the company's forthcoming cytometer system, unveiled this month at the World Preclinical Congress held in Boston.

Said to allow users to obtain 3D fluorescence images from cell culture mediums within a few minutes, the system has been developed to meet the growing need for more physiologically-relevant in vitro cell culture models in drug discovery and manufacture.

"To develop and advance phenotypic assays and screenings using these physiologically-relevant cellular models, new types of instruments are needed to facilitate high-throughput fluorescence imaging and measurement of heterogeneous 2D and 3D cell cultures," commented the company.

"To meet this need, we have developed Zyncscan technology that performs an x-z plane scan of a microplate utilizing a light-sheet."

According to Zyncscan literature, up to four excitation lasers can be installed in the cytometer. A light-sheet scan of whole wells in a microplate achieves voxel resolutions of 2-3 microns in the x-y direction and 6-7 microns in the z direction, for culture thicknesses up to 300 microns from the bottom of a well, and does so "within a few minutes per color." A voxel image using line scanned tomography is constructed, and an x-y image with depth information is reconstructed.

Three particular scenarios are given by Hamamatsu as illustrating the capabilities of the Zyncscan platform.

One is high-speed fluorescence cytometry for 2D monolayer cultures, in which scans of samples labeled with red and green indicators could be carried out sequentially across a 96-well plate in 120 seconds per wavelength. Fluorescence views of the entire plate and individual wells can then be obtained by merging the red and green data.

A second is the generation of 3D fluorescence images in "depth view," whereby data is gathered from the bottom 300 microns of all the wells of a microplate in a single scan, an operation said to be complete in a few minutes per scanning wavelength.

According to Hamamatsu, its Zyncscan technology will now be incorporated into a forthcoming light-sheet microplate cytometer branded as "CYTOQUBETM", with a prototype due to be shown at the WPC meeting.

"We plan to initiate validation and application experiments in several research sites in drug discovery and development by early 2020," commented the company. "'CYTOQUBETM' is planned to be released by the end of the next fiscal year, September 2020."