Researchers have repurposed an algorithm originally developed for Netflix’s 2009 movie preference prediction competition (see below) to create a method for acquiring classical Raman spectroscopy images of biological tissues at unprecedented speeds. They say that this advance could make the simple, label-free imaging method practical for clinical applications such as tumor detection or tissue analysis.

A multi-institutional group of researchers led by Hilton de Aguiar, of the École Normale Supérieure, Paris, France, discovered that a computational imaging approach known as compressive imaging can increase imaging speed by reducing the amount of Raman spectral data acquired.

They have demonstrated imaging speeds of a few tens of seconds for an image that would typically take minutes to acquire and say that future implementations could achieve sub-second speeds. The group’s work has been reported in Optica, The Optical Society's journal for high-impact research. 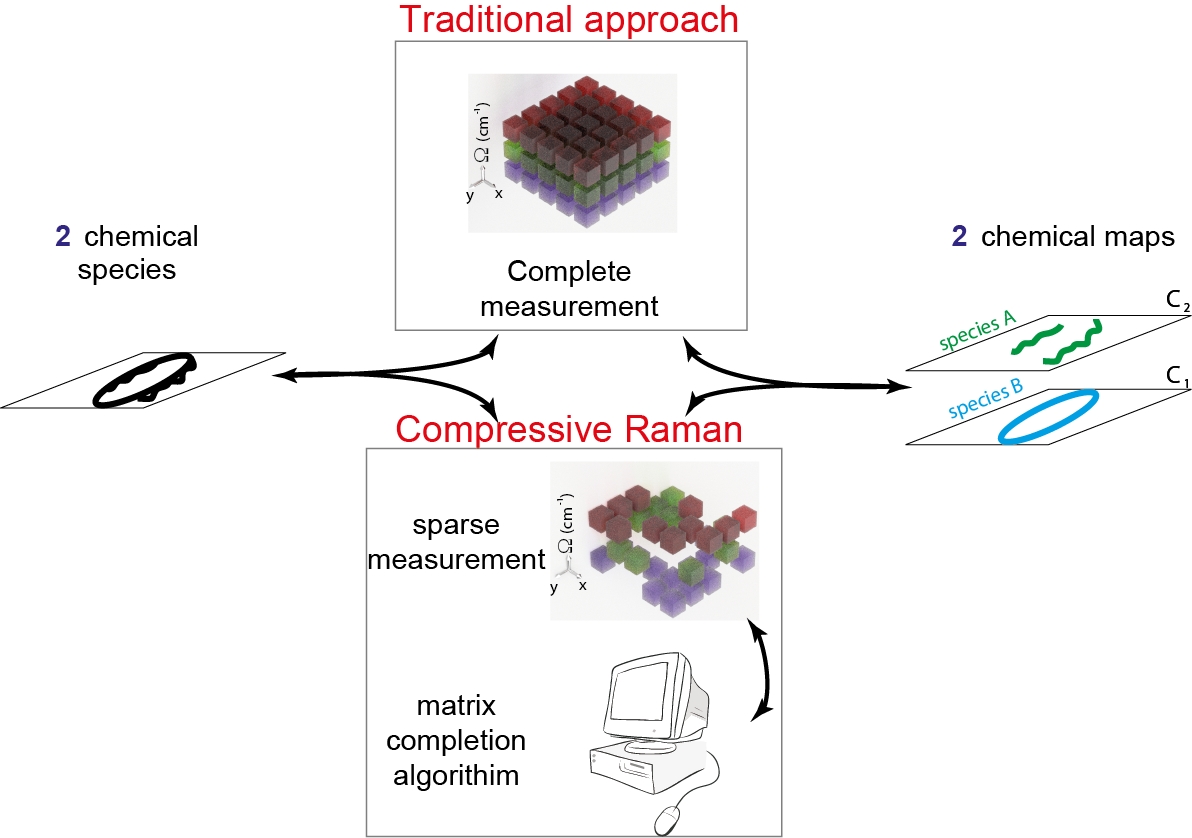 With the compressive Raman approach, the researchers acquires less spectral data than traditionally required and then use the matrix completion algorithm.

de Aguiar’s group accomplished this feat by acquiring only a portion of the data typically required for Raman spectroscopy and then filling in the missing information with an algorithm developed to find patterns in Netflix movie preferences. While the algorithm did not win Netflix’s $1 million prize, it has been used to meet other real-world needs, in this case a need for better biological imaging.

The Netflix Prize sought to substantially improve the accuracy of predictions about how much a viewer would enjoy a movie based on their movie preferences. On September 21, 2009 Netflix awarded the $1M Grand Prize to a team called BellKor’s Pragmatic Chaos.

de Aguiar commented, “Although compressive Raman approaches have been reported previously, they could not be used with biological tissues because of their chemical complexity. We combined compressive imaging with fast computer algorithms that provide the kind of images clinicians use to diagnose patients, but rapidly and without laborious manual post-processing.”

Raman spectroscopy is a non-invasive technique that requires no sample preparation to determine the chemical composition of complex samples. Although it has shown promise for identifying cancer cells and analyzing tissue for disease, it typically requires image acquisition speeds that are too slow to capture the dynamics of biological specimens. Processing the massive amount of data generated by spectroscopic imaging is also time-consuming, especially when analyzing a large area.

“With the methodology we developed, we addressed these two challenges simultaneously —increasing the speed and introducing a more straightforward way to acquire useful information from the spectroscopic images,” said de Aguiar.

To speed up the imaging process, the researchers made their Raman system more compatible with the algorithm. They did this by replacing the expensive and slow cameras used in conventional setups with a cheap and fast digital micromirror device known as a spatial light modulator.

This device selects groups of wavelengths that are detected by a highly sensitive single-pixel detector, compressing the images as they are acquired. “A very fast spatial light modulator made it possible to acquire images and skip data bits very quickly,” said de Aguiar. “The spatial light modulator we used is orders of magnitude less expensive and faster than other options on the market, making the overall optical setup cheap and fast.”

The researchers demonstrated their new methodology using a Raman microscope to obtain spectroscopy images from brain tissue and single cells, both of which exhibit high chemical complexity. Their results showed that the method can acquire images at speeds of a few tens of seconds and accomplish a high level of data compression — reducing the data up to 64 times.

The researchers believe that the new approach should work with most biological specimens, but they plan to test it with more tissue types to demonstrate this experimentally. In addition to clinical tools, the method could be useful for biological applications such as algae characterization. They also want to improve the scanning speed of their system to accomplish sub-second image acquisition.