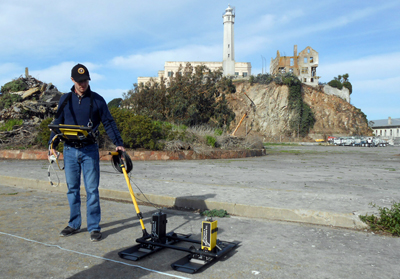 Binghamton archaeologist Timothy de Smet and colleagues used terrestrial laser scans, ground-penetrating radar data and georectifications (the process of taking old digitized maps and linking them to a coordinate system so that they can be accurately geolocated in 3D space) to find and assess the historical remains beneath the former recreation yard of the Alcatraz penitentiary, run by the US Department of Justice from 1934 through 1963.

This nondestructive research method revealed that remnants of buried structures, including a “bombproof” earthwork traverse along with its underlying vaulted brick masonry tunnel and ventilation ducts, ran east to west beneath the recreation yard of the Alcatraz penitentiary.

The work has been published in a paper, The fate of the historic fortifications at Alcatraz island based on terrestrial laser scans and ground-penetrating radar interpretations from the recreation yard, in Near Surface Geophysics.

de Smet said he was shocked to discover that the historical structures were maintained in such good condition: “I was surprised for several reasons,” said de Smet. “The remains of these historical archaeology features were just a few centimeters beneath the surface and they were miraculously and impeccably preserved. The concrete veneer of the Recreation Yard floor is incredibly thin and, in fact, in places sitting directly atop the architecture from the 1860s.”

While people flock to the island for its reputation as America’s strongest prison, many overlook Alcatraz’s former military role as a 19th century coastal fortification. The fortification, featuring underground ammunition, is important from a military history perspective as it marks the transition to earthen structures from the traditional brick and masonry constructions that characterized earlier 19th century coastal defenses.

The noninvasive process used by researchers permits accurate spatial identification of 19th-century architectural structures depicted in historical documents. With this new breakthrough, the approach can be applied to subsurface investigations at other important cultural landmarks worldwide. de Smet said the results prove that archaeologists can detect historical structures in a gentler manner.

“With modern remote sensing methods like these, we can answer fundamental archaeological research questions about human behavior, social organization and cultural change through time without costly and destructive excavation,“ he said.

de Smet is currently preparing a manuscript for submission to the Journal of Cultural Heritage on the application of terrestrial laser scans and ground-penetrating radar to the remnants of the former Citadel beneath the prison.