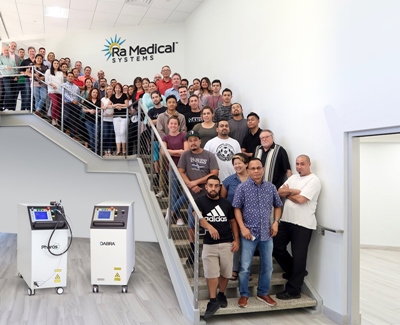 A Californian company with a new laser system for treating blocked blood vessels in the legs is aiming to raise around $50 million in an initial public offering (IPO) of stock.

Ra Medical Systems, which was co-founded by former PhotoMedex executive Dean Irwin and Eli Lilly marketeer Melissa Burstein back in 2002, is hoping to use the proceeds of the offering to both expand its sales force and support new clinical studies.

Updated filing
According to the latest version of its “S-1” prospectus filing with the US Securities & Exchange Commission (SEC), the company is hopeful of selling just over 3.3 million shares – equivalent to approximately one-third of the total common stock – at an assumed price of $15 per share.

That’s despite Ra Medical’s most recent sales figures showing that the company posted revenues of only $2.2 million in the first half of 2018, generating a loss of $11 million in the process.

The assumed valuation appears to be based on expectations of a potentially huge and growing market for treating vascular disease with an ultraviolet laser photoablation technique. Having focused on dermatological applications such as psoriasis with its 308 nm xenon chloride (XeCl) sources since 2004, the company recently commercialized what it calls “DABRA” – shorthand for “Destruction of Arteriosclerotic Blockages by Laser Radiation Ablation”.

Using a combination of its excimer laser and a disposable catheter system, physicians are able to use DABRA to treat “lower extremity vascular disease”, where narrowed or blocked arteries and veins restrict blood flow to and from the legs of a patient – putting them at risk of heart attacks, strokes, and even amputations if left untreated.

Typically, those patients would be treated with invasive bypass surgery or stent angioplasty procedures, but both are said to frequently result in recurrence of the disease.

“DABRA employs photochemical ablation, or the removal of body tissue by using photons, to remove blockages by breaking the bonds of the obstructing plaque directly,” reports Ra Medical in its S-1 filing. “Unlike many treatments for PAD (peripheral artery disease) and other vascular diseases that may damage the arterial wall, DABRA quickly photochemically dissolves plaque with minimal vascular trauma.”

Under-diagnosis
The company also quotes recent analysis estimating that although around 18 million people in the US currently suffer from PAD, only 20-30 per cent of those are being actively treated. A recent article in the British Medical Journal estimated that 13 per cent of all over-50s in the Western population suffer from the condition.

“Despite its prevalence, PAD is under-diagnosed and undertreated relative to many other serious vascular conditions, including coronary artery disease, in part because up to half of the PAD population is asymptomatic, and many dismiss symptoms as normal signs of aging,” adds Ra Medical.

Linked closely with the effects of age, smoking, diabetes, and obesity, it is widely expected that the number of people suffering from PAD will increase in the coming years – along with the costs of treating and managing those with the condition.

Thus far, the DABRA system has been tested in a pivotal study on 64 patients at four different clinical sites in the US. “The final study results demonstrated 94 per cent effectiveness in successful crossing of the target lesion based on angiographic analysis, or a medical imaging technique used to visualize the inside of blood vessels, at time of the procedure with [zero] reported serious adverse events,” says Ra Medical.

The system received Food & Drug Administration (FDA) approval for marketing in the US in May 2017, a few months after achieving CE Mark clearance in the European Union.

Commercial launch
Having since completed its initial 12-month commercial launch of DABRA, the company now has a dozen employees working on system sales, compared with only three selling into dermatology applications. It manufactures the laser systems and catheters in-house, at its Carlsbad headquarters.

That sales force split indicates the company’s shift in emphasis towards vascular treatments, with Ra Medical saying that it intends to spend around $21 million expanding its sales and marketing efforts if the IPO goes according to plan. An additional $14 million has been earmarked for clinical study support.

The proposed listing on the New York Stock Exchange, under the ticker name “RMED”, follows private financing that raised $7.9 million earlier this year, an amount that brought aggregate private backing of the company to $27.5 million since its inception.

Including a potential over-allotment offer of an additional 500,000 shares, the September 17 amended SEC filing stated that Ra Medical could raise a maximum of $61.3 million if it sells at the upper end of its proposed $14-16 range.

If successful, that would provide a huge boost to the company's balance sheet: as of June 30, it showed cash and equivalents of $9.8 million and no outstanding debts.