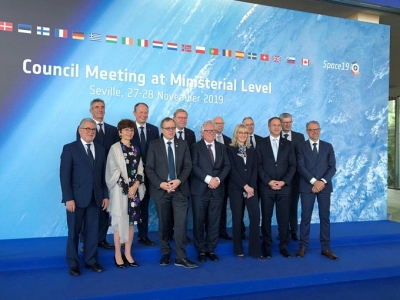 The European Space Agency (ESA) council of ministers has approved what is being described as the organization’s most ambitious plan to date, with a significant boost in funding set to support several photonics-enabled missions.

Among those expected to benefit are the laser interferometer space antenna (LISA) - the first gravitational wave detector deployed in space - as well as a fiber-like laser communications network in the sky, and six new “Sentinel” Earth observation missions that will rely on a variety of photonics technologies.

The plan, said to represent a commitment to the ESA’s biggest-ever budget, also includes support for the “ATHENA” X-ray telescope, to study black holes in unprecedented detail.

Although further commitments to funding from ESA’s member states will be required to guarantee the various mission launches, the latest backing is seen as a major step towards achieving that.

Pushing boundaries
Following a two-day summit of ESA ministers in Seville, Spain, the agency announced: “For the first time in 25 years, there will be a significant boost in funding for ESA’s world-class and inspirational science program, pushing the boundaries of our understanding of who we are and where we come from.”

The agency’s director general Jan Wörner added: “Together we have put in place a structure that sees inspiration, competitiveness and responsibility underpin our actions for the coming years, with ESA and Europe going beyond our previous achievements with challenging new missions and targets for growth along with the wider industry.”

In total the ESA’s 22 member countries - which include Canada, Switzerland and Norway from outside the European Union - have pledged €14.4 billion towards future efforts, at a rate of €4.2 billion per year.

The largest individual contributor to that total is Germany, whose representatives have pledged to provide €3.3 billion. France, Italy, and the UK are the next highest contributors, and together the four countries are providing nearly 70 per cent of the total.

The biggest chunk of the budget, equivalent to €2.54 billion, will be allocated to Earth observation activities. Under its Copernicus program, ESA has already launched an extensive network of Sentinel satellites that collect data including high-resolution optical and multispectral imagery of Earth, to assist with land and ocean monitoring, climate studies, weather forecasting, and much more besides.

Sentinel candidates
According to the legal text approved by the ministers at the Seville summit, six more Sentinel missions will be developed.

Copernicus program managers have already identified six “high-priority” candidate Sentinel missions - including a hyperspectral imaging payload to assist sustainable agricultural and biodiversity management, and an infrared spectrometer that would be able to monitor man-made carbon dioxide in the atmosphere.

While the LISA gravitational wave mission is particularly complex, and remains a long time from proposed operation - the existing plan envisages a launch date around 2034 - it would give astronomers and cosmologists a completely new way to observe the universe.

Like the three terrestrial gravitational wave observatories currently up and running in the US and Italy, it would use ultra-sensitive lasers and optical components to measure “ripples” in space-time caused by distant cosmic phenomena such as collisions between black holes.

However, because it will be positioned in space, the interferometer “arms” of LISA will be much longer (2.5 million kilometers) than those of the existing terrestrial equivalents.

It means that LISA should be able to detect the much lower-frequency ripples that are generated when particularly large masses are involved in those cosmic collisions.