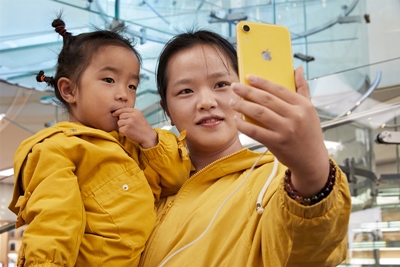 Apple's latest iPhones: not as popular in China

Stock prices of photonic component companies supplying Apple have slid in value after the iPhone maker surprised markets with a profit warning.

Blaming slower sales in China, amid tougher competition and wider fears of saturation in the smart phone sector evidenced by weaker-than-expected demand for its latest high-end devices, Apple said that revenues in the final quarter of 2018 would be around $5 billion lower than previously expected.

"Lower than anticipated iPhone revenue, primarily in Greater China, accounts for all of our revenue shortfall to our guidance," wrote CEO Tim Cook in a letter to shareholders. "In some developed markets, iPhone upgrades also were not as strong as we thought they would be."

Representing the first such announcement by the Californian tech giant in the iPhone era, the warning saw Apple’s stock fall by around 8 per cent in value in pre-market trading on January 3.

Unsurprisingly, that has had a knock-on effect on some key elements of the supply chain, notably manufacturers of vertical-cavity surface-emitting laser (VCSEL) chips, used in Apple’s flagship phones to provide security based on facial mapping.

Nasdaq-listed Lumentum dropped in value by more than 7 per cent as the markets re-opened in New York, while the UK-based photonics device foundry IQE fell by 5 per cent in London. II-VI, which is in the process of acquiring fellow VCSEL maker Finisar, slid by a similar amount.

Diversifying VCSEL demand
While all of those companies are relatively well diversified, Apple has come to represent a major customer over the past couple of years after adopting the laser-based facial mapping security hardware as a standard feature in iPhones.

One of the difficulties for the VCSEL suppliers is dealing with the sudden surges of demand for Apple as it ramps production, as well as the subsequent drop-off. In November Lumentum lost nearly one-third of its market valuation when it slashed its own sales forecast for the closing quarter of 2018. The emergence of the "Face ID" feature saw Apple become the company’s largest single customer in the year ending June 2018, accounting for around 30 per cent of sales.

That exposure and the latest slump has seen Lumentum’s stock price virtually halved from the long-term high of $74 reached last summer, with II-VI now down around 40 per cent since January 2018.

In November, IQE said that last year’s VCSEL production ramp was steeper and later than expected, and stressed that in 2019 it expected a significantly broader spread of OEM and end customers for the technology.

The advanced semiconductor epiwafer foundry believes it holds a very large share of the available market, and is adding major new capacity in the UK to service what it expects to become a huge opportunity, as well as one that goes well beyond the initial demand in smart phones.

That anticipation of a large and diversifying market for VCSELs has also attracted industrial laser firm Trumpf, with the German company poised to acquire another key supplier in the form of Philips Photonics.

As well as 3D sensing in phones, higher-power VCSELs are now being investigated for applications in lidar systems for autonomous vehicles, infrared heating, and laser materials processing.