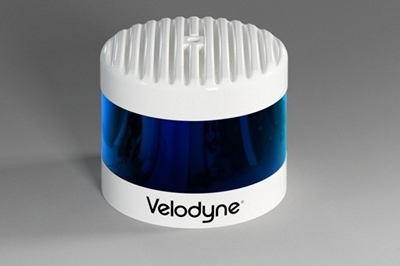 Laser-based sensor specialist Velodyne Lidar has revealed a new strategic investor in the form of the global optics giant Nikon.

California-based Velodyne, which is engaged with several car manufacturers on the development of autonomous vehicles using its lidar equipment, says that as well as providing $25 million in funding Nikon is discussing a “multifaceted business alliance”.

Aside from its household-name status as a leading camera brand, Nikon sells high-specification industrial equipment including lithography tools for semiconductor wafer patterning, microscopes, and ophthalmology tools.

Velodyne said that the companies would aim to combine Nikon’s optical and precision technologies with Velodyne’s sensors, including collaboration in technology development and manufacturing.

“Velodyne believes the relationship will advance the timeline for manufacturing and mass production of lidar for the autonomous and advanced safety global market,” added the firm. “The companies share a futuristic vision of advanced perception technology for a wide range of applications including robotics, mapping, security, shuttles, drones, and safety on roadways.”

Early mover advantage
One of the early movers in automotive lidar, Velodyne attracted venture investment of $150 million in summer 2016 – with the likes of Ford and Chinese search engine firm Baidu among its backers. Its puck-shaped sensors have been regularly seen on prototype and concept self-driving vehicles under development by top-tier car firms.

Since that funding round dozens more rivals have emerged, many focusing on higher-end sensors based around longer-wavelength sources (operating at 1550 nm) than the 905 nm lasers that Velodyne has typically deployed in its products.

Despite relying on lasers that are significantly more expensive to produce, proponents of the longer-wavelength approach say that because of more relaxed eye-safety regulations they can use far higher power levels – meaning higher-definition scans and longer ranges.

Velodyne points out that the higher power is also needed partly because of the significantly higher water absorption experienced at the longer wavelength.

Unlike many of its rivals, Velodyne also sells its sensors into a variety of other applications, for example geographical mapping, security, logistics, and unmanned aerial vehicles.

David Hall, the firm’s founder and CEO, said of the Nikon deal: “Velodyne is creating a network of powerful alliances supporting the global autonomous vehicle industry. One hundred years ago, optics and camera technologies like Nikon’s helped people to see better. Now, the basis of those technologies is helping computers see.”

Established in late 2015, Velodyne Lidar now employs 550 people – many at its so-called “megafactory” in San Jose. Other sites include a research and development laboratory in Oakland, and offices in China and Germany.