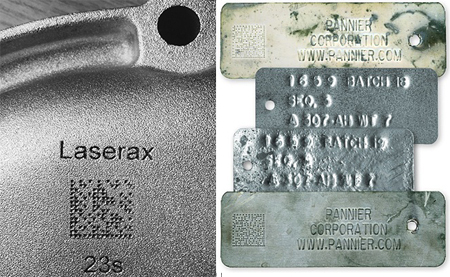 Many diecast metal products have to go through shotblasting following casting as a means to achieve a uniform surface finish. This is an aggressive surface treatment that usually obliterates the legibility of any prior direct part marking, even with metallic labels.

Die casters have previously used “lot identification” or batched part-to-part identification procedures at the end of a production process. But both of these solutions are not conducive to a lean manufacturing process and defeat the purpose of industrial traceability, says Laserax.

This Quebec City, Canada-based company has developed a laser-based technique (patent pending) for shotblast-resistant marking to enable identifcation of a shotblasted part.

The company says that laser direct part marking (LDPM) is a rapid process that can be carried out even as the freshly-blasted metal components are cooling off. The company website states “LDPM also requires no costly consumables and the technique is robust because the laser markings resist wear over time.”

While developing its laser-based marking technique, Laserax was focused on achieving industry-standard data matrix codes (DMCs), such as are often required by the automotive manufacturing industries to ensure component traceability. DMCs are composed of "dark and light" squares arranged in what may appear to be a random pattern. 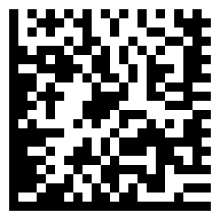 In fact, DMCs always feature an L-shaped frame along the left and lower edges and alternating black and white cells along their upper and right edges, known as the clock. DMCs are carefully designed with an encoding algorithm that prevents the loss of information even when up to 60% of the code surface is rendered illegible. They also feature a huge density of information, which reduces the size of the marking and thus the marking time.

In the development of its LDPM method, Laserax used ISO 29158 as a reference standard or “benchmark”. This was developed by the International Organization for Standardization especially to assess the symbol quality of direct marked parts when the reader is a two-dimensional imager.

At first, Laserax believed that boring deeper into the material to be marked would protect a mark from the impact of the shotblast medium. However test results “demonstrated the fallacy of this hypothesis,” stated the company. So a new hypothesis aimed to achieve what Laserax calls a “highly contrasted clock”; it was found that dark cells surrounded by pale cells had a better contrast. So the revised aim was to separate adjacent dark cells with a fine wall.

Results from the company’s own tests led to the following approach, described on the website: “Our laser technology experts tested with different parameters to establish the best performance for a DMC composed of a 10x10 dot matrix on A380 aluminum alloy and shot-blasted with an S170 cast steel shot for 90 seconds.”

The test rig used a Cognex DM262X barcode reader with an ISO 29158-enabled grading system. This set-up was able to compare the contrasts of the 85 configurations tested.

Laserax’s eperimental results showed that under the above conditions, it was possible to get a DMC with a “Grade B” contrast from marking that took less than 10 seconds to engrave. The company stated, “Our laser technology experts devised an exclusive, patent-pending process to permanently identify parts that resist shotblasting. Results may vary and optimization of the parameters may be required for some specific processes and alloys.”