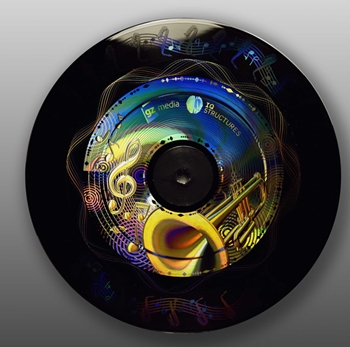 In the groove: holographic vinyl

IQ Structures, a company in the Czech Republic developing nano-scale optics, claims to have introduced a new technology for embossing holograms into the sonic grooves that produce the music in vinyl records.

Intended for both decorative and anti-counterfeiting purposes, the holograms are said to have no detrimental impact on sound quality, and to maintain their brightness long-term.

IQ Structures adds that the technology, developed under a pilot project with the leading vinyl disc manufacturer GZ Media, is now ready for mass production.

“The hologram is replicated directly into the vinyl and meets all requirements, including covering a life cycle spanning many years and enduring mechanical depreciation,” states the company.

Anti-counterfeiting
IQ Structures says the development indicates that it is “very likely” that holography will expand into new areas of application, perhaps including the food industry and other everyday items.

“Holographic stickers are sometimes sufficient, but embossing a hologram directly into the protected item is more elegant and provides a stronger anti-counterfeit protection,” adds Roman Houha, who led the development at the Czech firm.

“However, a range of technological issues must be solved for each application. I am delighted to state that we have moved the [boundaries] of possibility and demonstrated that holograms are also working on non-traditional materials.”

The effort with GZ Media, which has been manufacturing records since 1951 and specializes in colored vinyl and customized packaging, is not the first attempt to add holograms to records.

However, those earlier efforts only focused on the space at the center of the disc. “IQ Structures´ technology allows the hologram to be embossed into the grooves carrying the sound recording,” stresses the firm.

Vinyl renaissance
GZ Media claims to be the world’s largest producer of vinyl records, benefitting from the resurgence of interest in the format in recent years. The company says that demand for vinyl bottomed out in 1993, but after growing back slowly at first its annual production has jumped from 10.5 million pressings in 2013 to nearly 14.4 million in 2014. It then doubled its production capacity with a new press in 2015, and expanded again with a new factory in Canada two years later.

Following that expansion, it made 106,000 records on a single day in April 2018 – equivalent to an annual run rate of nearly 40 million, and suggesting a potentially significant market for the holograms.

In late 2018 the IQ Structures technology used in the vinyl application won a prize for the best application of holograms in a decorative or packaging product, at the annual awards organized by the International Hologram Manufacturers Association. The disc featured a hologram entitled “Armstrong and the trumpet”.

At the time, IQ Structures said that it was able to produce holograms from almost any material, and integrate them into nearly any item. The company already has a manufacturing unit with a capacity to protect more than 100 million polycarbonate identity cards each year, and is working on related technology to improve light management in LED luminaires.