The European Photovoltaic Industry Association says that 2010 marks a watershed year in which concentrated PV technology is ready for large-scale deployment. 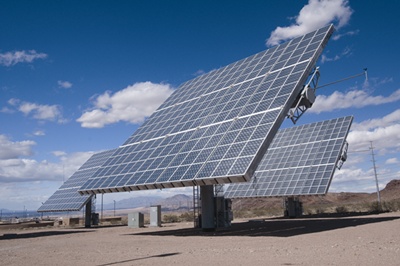 With multiple commercial-scale concentrated photovoltaics (CPV) plants being connected to the grid during 2010, the technology is now ready for take-off.

That’s according to the European Photovoltaic Industry Association (EPIA), which has just hosted its first international conference on the topic. Held in Munich on November 10, the event gathered together some of the leading companies developing CPV technology.

EPIA reckons that approximately 20 MW of CPV systems will be deployed this year. And although that figure represents just a drop in the ocean when compared with the overall PV market – total installations are expected to be in the region of 15 GW this year – it is also an important breakthrough for the technology.

Relying on high-efficiency, multi-junction solar cells and optical components needed to concentrate sunlight (typically by a factor of 500), CPV has been viewed by many as an expensive solution in all but the sunniest and driest of locations. However, EPIA now suggests that the CPV market will reach the gigawatt level by the middle of this decade.

That rate of growth for CPV installations has previously been suggested by market analyst company iSuppli, although rival forecaster Lux Research has predicted a more conservative 500 MW by 2015.

What EPIA, Lux and iSuppli do all agree on is that 2010 has turned out to be a breakthrough year for concentrator systems. “Current commercial-scale projects demonstrate that the technology has the highest performance in the hot and arid regions of the world,” said EPIA. “The module efficiency in current power plants has reached 25-27%, and is expected to increase to 30% by 2012."

Increases to that module efficiency figure will make the technology much more competitive in regions with lower insolation, although because CPV does not work in diffuse sunlight the technology will likely always be restricted to installations in predominantly sunny locations.

Lowest cost of materials
Crucial to the appeal of CPV is its much lower requirement for semiconductor material than conventional PV based on large-area silicon or thin-film panels. “CPV really is unique, in the sense that it combines highest efficiencies with the lowest cost of materials,” said Hansjörg Lerchenmuller, CEO at leading CPV player Concentrix Solar – a spin-out from the Fraunhofer Institute for Solar Energy Systems (ISE) that is now owned by the France-based semiconductor materials giant Soitec.

Adel al Gammal, EPIA’s secretary general, added that system reliability – one of the key requirements of any energy generation system, and something that CPV skeptics have highlighted as a weakness – was now being proved: “Today, multiple commercial-scale CPV power plants are demonstrating high reliability in the field, besides the already proven performance achieved during the certification process – which clearly indicates that CPV technology is ready for large-scale deployment."

Both Lerchenmüller and Mark Crowley, CEO of the US-based CPV specialist SolFocus, agree with that sentiment, saying that the technology can now be described as “commercial”, with a number of megawatt-scale projects now completed.

Examples of commercial-scale deployments include a 1 MW Concentrix installation at a Chevron-owned mine in New Mexico, while SolFocus will shortly begin working on an installation in Saudi Arabia. Meanwhile, US-based Amonix – rated by Lux Research as the most advanced of the CPV companies – recently broke ground on a new systems manufacturing facility in Nevada, which will provide some 278 jobs.

When at full capacity, the manufacturing plant will operate 24 hours per day, seven days per week, turning out solar equipment with a production capacity of 150 MW annually. The first line in the first phase of the facility will begin manufacturing by the end of the first quarter of 2011, says Amonix.