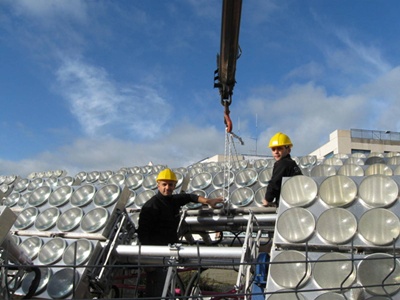 An Italian-American start-up company is claiming that its novel take on concentrated photovoltaics (CPV) technology can deliver a higher efficiency and energy production than any other approach to PV.

Solergy, which is headquartered in Silicon Valley but largely comprises a group of young engineers at an R&D center in Rome, has just agreed its first large deployment of the technology – a 100 kW installation at Pantelleria airport in Sicily. One of the key differences between the company’s approach and others in the CPV sector relates to the concentrator optics used – Solergy’s is based around an all-glass optical lens.

Of the leading players emerging in CPV, Amonix and Concentrix Solar both use Fresnel lenses – based on acrylic and silicone-on-glass materials respectively – while SolFocus uses reflective optics rather than lenses.

But Solergy, which has received financial backing from the technology conglomerate Videocon, says that there are some major issues with polymer-based concentrator optics. “Glass is the only way to guarantee the durability, reliability, and performance of the concentrating optics over time,” the company’s CEO and co-founder Yoav Banin told optics.org. “One of our initial and fundamental design principles from day one was that if this technology is ever to work reliably, we must have optics in glass. Otherwise it will not be a viable solution over the long term.”

Backing up that claim, Solergy cites a recent study by Sarah Kurtz and colleagues at the US National Renewable Energy Laboratory (NREL) that was presented at the SPIE Optics + Photonics conference earlier this year. The NREL team discovered problems including hazing, yellowing and cracking of polymethyl methacrylate (PMMA) Fresnel lenses. “Aside from the NREL study, which clearly demonstrates all the durability problems of plastic lenses, we have confirmed this with our own internal tests,” Solergy added.

“Fundamental breakthrough”
While PMMA lenses have been adopted because of their low cost, Solergy says that its all-glass approach is actually no more expensive than the polymer components: “We have achieved an all-glass, large dimension, highly precise lens, that is fabricated via a proprietary low cost process,” said the company.”

“Also, the unique lens design provides an exceptional optical efficiency and delivers a uniform radiation distribution on the surface of the cell to maximize fill-factor – absolutely essential to achieving high efficiency. In mass production, the cost of the lens based on our technology is actually less than that for plastic Fresnel lenses, per square meter. This is one of the core elements of our technology and represents a fundamental breakthrough in the field of CPV.” 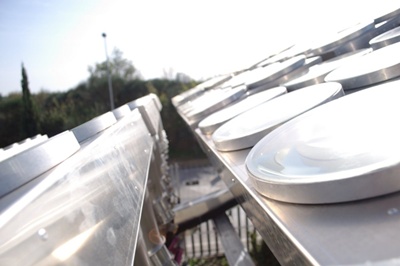 Solergy is now embarking on its first major CPV installation, in collaboration with The National Italian Civil Aviation Authority (ENAC), and is also exhibiting at this week’s EnerSolar exhibition being held in Milan, Italy. The company says that it has produced a CPV system with a record conversion efficiency of 32.9 per cent (NREL has verified 29 per cent for an earlier Solergy module)*. In addition, it claims to have internal data from a test tracker system in Rome showing that the approach can “consistently produce more energy than any other PV product”.

"We are excited to launch our company and present our CPV products to the world," said Banin. "We have dedicated the past three years to developing a system we believe not only addresses the challenges CPV has faced in the past, but takes a significant leap forward in terms of performance, reliability, and technological innovation."

The ENAC installation at Pantelleria is expected to be completed by the end of 2011, and Solergy says that it will release more details of the system performance to back up its energy production claims once the installation is finished.

* edited from earlier version: Solergy has applied the same measurement techniques to produce the 32.9 per cent figure based on an in-house measurement.