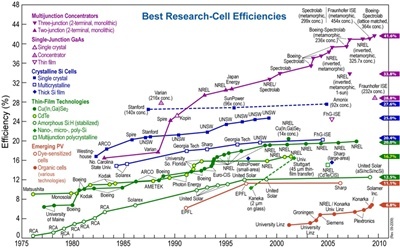 Spectrolab, the Boeing subsidiary that specializes in high-efficiency solar cells, says that it has begun mass production of its newest “C3MJ+” devices – which have an average conversion efficiency of 39.2% at a 500-sun concentration.

That is an improvement of 0.7% on its existing “C3MJ” cells (the product nomenclature reflects the three junctions within the cell’s structure, which enable it to capture much more of the solar spectrum than conventional silicon or thin-film cells).

The design of the C3MJ+ cells is said to be similar to that of the record-breaking 41.6% device that Spectrolab announced in 2009. That lattice-matched cell showed its maximum efficiency at a concentration of 364 suns, slightly below the typical concentrating photovoltaics (CPV) industry standard of 500 suns.

Since then, Spectrolab’s world record has been broken by Spire Semiconductor, which revealed just last month that it had produced a 42.3% efficient cell, which also delivered 42.2% at 500 suns.

However, for commercial purposes it is not the record-breaking headline but the performance of the average cell in production that matters – and Spectrolab’s move into volume production is good news for CPV system builders, as it should translate directly into higher energy production and lower cost per unit of energy generated.

“These more efficient cells are drawing interest from a number of current and potential customers,” said Russ Jones, director of business development at Spectrolab. “Given the news cells’ close similarity to our existing production cells, we believe that our current C3MJ customers will be able to easily upgrade for more efficiency.”

Market momentum
Spectrolab told optics.org that it expected most customers to adopt the new cell rapidly, while a new 40%-efficient cell (C4MJ) will be launched next year. "[We] have seen a substantial increase in demand in 2010 as compared to 2009," the company said. "e expect to deliver about 30 MW of CPV cells in 2010 and as previously stated we expect demand to be as high at 100MW in 2011."

The nascent CPV market, which often vanishes below the radar of the wider photovoltaics scene, now appears to be entering a truly commercial phase. This year has seen the first grid-connected CPV installations on a megawatt-scale, and with companies such as Amonix investing in volume CPV system manufacturing facilities, it is likely that 2011 will witness significant market growth for the technology as its reliability is proved out. 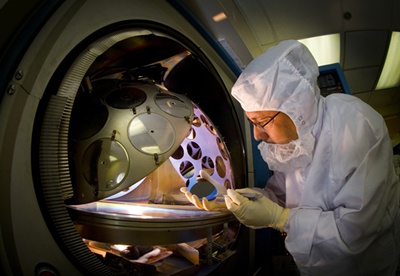 CPV relies on multi-junction cells produced by the likes of Spectrolab, its US rival Emcore, and the German company Azur Space. While the individual cells are expensive to produce, the fact that they can handle concentration ratios in excess of 500 suns, and perform better in hot conditions than conventional PV materials, means that they are already able to produce relatively low-cost electricity in the most suitable conditions.

To expand beyond that niche requires improvements to both cell and system efficiency and a reduction in cell costs, to lower the overall cost per unit of electricity that is generated. Competition among cell producers looks likely to drive improvement on both fronts: as well as Spire’s new world record for an individual cell, the optoelectronic device maker JDSU – much better known for its expertise in lasers and fiber-optic components – has entered the market, while the UK-based foundry company IQE is working on an advanced hybrid structure that promises to reduce cost significantly by using a silicon platform.

Spectrolab says that it welcomes the additional competition, and is confident of remaining ahead of its rivals. "Spectrolab pioneered the technology and has consistently remained the world leader, both in production volume and in delivered cell efficiencies," the company said. "Combined with Boeing's product quality requirements and financial strength, [this] makes us the preferred choice among CPV system customers. It is encouraging to see new competitors emerge since it is a validation of the "coming of age" of the CPV market."