US developer says that it is ready to manufacture high-efficiency cells based on innovative bi-facial crystal structure. 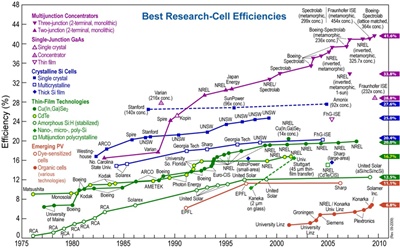 Spire Semiconductor has set a new world record for solar cell efficiency. The company, which has been working with the US National Renewable Energy Laboratory (NREL) under an 18 month incubator project, produced a triple-junction cell with 42.3 per cent conversion efficiency.

That figure beats the previous best of 41.6 per cent, set by Spectrolab last year, after the Fraunhofer Institute for Solar Energy (ISE) had achieved 41.1 per cent in early 2009, and maintains the steady increase in “champion” multi-junction cell performance seen over the past couple of decades (see graphic, right).

Importantly, the Spire cell reaches its peak efficiency under a solar concentration of 406 suns, and that performance drops only slightly to 42.2 percent at 500-sun concentration – the typical degree of focusing that is used in commercial concentrated photovoltaics (CPV) systems.

In contrast, the champion cell developed by Spectrolab reached its peak efficiency at a lower concentration of 364 suns. The Californian company, which is owned by Boeing, says that its production concentrator cells had an average efficiency of about 38.5 per cent in 2009, although this was expected to increase to 40 per cent this year.

Cost-effectiveness
In CPV, the solar conversion efficiency is a particularly important element determining the cost-effectiveness of the approach. That’s because the high-efficiency cell comprises a high proportion of the overall system cost – so even a small increase in cell efficiency has a significant impact, lowering the cost of energy production.

Also encouraging is Spire’s contention that the record-breaking cell is production-ready, with immediate commercial availability. To truly drive down the cost of CPV-generated electricity, Spire will need to ensure that its production cells have a typical efficiency approaching that of the hero cell.

Since the new cell is based on a bi-facial crystal structure requiring a new manufacturing process, that is an impressive claim. The Spire approach is very different to the inverted metamorphic (IMM) structures that have previously been developed by NREL and Emcore, and which use graded buffer layers to allow mis-matched lattice layers to be grown sequentially on top of a GaAs wafer.

In the Spire process, a mis-matched 0.94 eV InGaAs cell is first epitaxially grown on the back-side of a lightly doped, N-type GaAs wafer. The epiwafer is then flipped, before 1.42 eV GaAs and 1.89 eV InGaP cells are grown lattice-matched on the opposite wafer surface. Cells are then made using only standard III-V process steps. Unlike the IMM process, the bi-facial approach does not use epitaxial liftoff or wafer bonding, but it does require performing the key growth steps in two separate stages and flipping the epiwafer, which Spire suggests to be an easier task.

Roger G. Little, the chairman and CEO of parent company Spire Corporation, said, “We are pleased to reach the record high CPV cell efficiency. The availability of this new high-efficiency cell will advance next-generation CPV system performance and reduce system cost for manufacturers, helping to move solar energy ever closer to the goal of grid parity.”