An Irish research team demonstrates the ability of the optical technique to distinguish between normal and abnormal cervical biopsies, potentially improving survival rates. 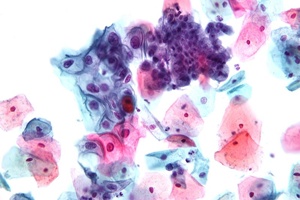 Raman spectroscopic imaging could greatly improve on current screening methods that are used to detect cervical cancer. That’s according to a research group presenting the results of their study at the International Biophotonics and Imaging Conference (BioPIC) being held in Ireland this week.

Kelvin Poon and Fiona Lyng, from the Dublin Institute of Technology, are one of a number of Irish research teams working on novel applications of Raman spectroscopy in medicine. They say that the technique can distinguish between normal and malignant cervical tissue samples with a near-100 per cent specificity and sensitivity.

That is in contrast to existing screening techniques, whose subjectivity and low specificity mean that despite the high curability of early-stage cervical cancer, it is a major killer. According to figures from the American Cancer Society, the disease is expected to kill more than 4000 women in the US this year, even though the annual number of new cases is 12,000 and the five-year survival rate for early-stage cervical cancer is very high at 92 per cent.

The technique works because of the different spectral responses produced by epithelial cells, navicular cells and polymorphs, as well as the different spectral contributions from glycogen, protein and nucleic acids. “In abnormal cervical cells, a significant increase in nuclear activity was observed,” say Poon and Lyng. “The results show that Raman spectroscopy can be used for identification and discrimination of normal and abnormal cervical tissue samples and cells.”

As well as showing strong potential to improve the effectiveness of cervical cancer screening, the Raman technique could have a number of other applications, and is being heavily studied by researchers in Ireland and elsewhere.

For example, a team at Dublin City University is using Raman to distinguish between different stages of liver disease, including cirrhosis and cancerous tissue. Their results have shown that the technique could be used for rapid, non-invasive diagnoses of the different stages.

Faster imaging with CARS
Meanwhile, a German collaboration between the Friedrich-Schiller University and Institute of Photonic Technology, both in Jena, is working on the more complex coherent anti-Stokes Raman spectroscopy (CARS) technique, which they say has the potential to be used to diagnose cancers rapidly and in vivo.

In their approach, linear Raman microspectroscopy can first obtain key Raman marker bands within selected areas of a tissue sample, before CARS microscopy quickly generates an image based on those previously defined markers.

It is hoped that hosting the BioPIC conference will strengthen Ireland’s position for inclusion in ESFRI Euro-BioImaging, an integrated platform of research, training and education in this field, and may also impact the strategic development of biophotonics in the upcoming EU Framework Programme 8, which will be a major opportunity to fund further research in this emerging field.

The conference is hosted by the National Biophotonics and Imaging Platform Ireland (NBIP Ireland) in affiliation with the Royal Microscopical Society (RMS). Brian Harvey, NBIP Ireland Coordinator, said: “Biophotonics and imaging research and technologies are key contributors to the Irish economy, as well as having important applications to the diagnosis and treatment of cancer, cardiovascular and neuro-degenerative diseases.”

“The benefit of continued funding will reap dividends in the form of the technological developments coming out of novel research in biophotonics and imaging contributing to Ireland Inc., the Irish economy and a more rapid recovery from economic recession. The conference provides an opportunity to promote Ireland as a European and global leader in biophotonics and imaging.”

NBIP Ireland is the national coordinator for Ireland’s participation in the Euro-BioImaging bid.