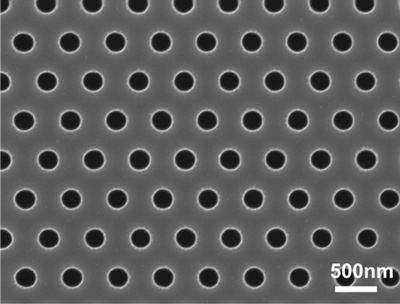 Swiss start-up Eulitha has developed a new approach to lithography that it says will lower the production cost of high-performance optoelectronic devices.

The company, which was spun out from the Paul Scherrer Institute in Villigen back in 2006, calls the technology “PHABLE” – short for “photonics enabler”. The technique enables the formation of periodic nanostructures, such as arrays of holes or linear gratings, over a large area – useful for fabricating devices such as high-brightness LEDs, solar cells and flat-panel displays – but at a much lower cost than the high-end scanners used in the mainstream microelectronics industry.

Eulitha’s Harun Solak told optics.org that the company offers both a batch wafer processing service and lithography tools for sale to manufacturers: “We think that the wafer processing service will be especially useful during the early phase when our industrial and academic customers will be assessing the suitability of the PHABLE technology to their needs,” said Solak.

The key advantage of the PHABLE approach is that it generates an optical image with a very large depth of focus, meaning that it can be used to print on non-flat surfaces. That is an important consideration for LED production in particular, because the epiwafers from which the chips are fabricated tend to bow during the manufacturing process.

This is because the key light-emitting semiconductor material, which is InGaN for blue and white chips, is deposited on a foreign host substrate, typically sapphire or silicon carbide. When the wafers are fabricated inside a hot reaction chamber, the different thermal properties of these materials cause the wafer to deform and bow.

Maximizing light extraction
Using lithography to generate a photonic crystal pattern on the surface of the LED wafer has long been recognized as a way to maximize light extraction from the LED structure, where the high refractive indices of the light-generating layers can trap photons. The problem for LED makers is that the lithography options available to them have either been unable to cope with wafer bow, or prohibitively expensive and designed for much larger wafers than the 2-inch or 4-inch platforms typically used to make LEDs.

Eulitha’s PHABLE process is designed to fill that gap with an affordable, one-step solution that is also compatible with conventional masks and ultraviolet exposure, and standard photoresists. “High-brightness LED and other device manufacturers will be able to rely on the usual, well-established sources for obtaining the required consumable materials, ensuring a low-cost manufacturing process for their photonic nanostructures,” claims the company.

Solak says that the benefits will be multi-dimensional, providing both lower production costs and improved device performance: “We see that the process complexity and the cost are real issues for optoelectronic [device] manufacturers. The lithography options that they have had until now have not been promising enough in these respects. We offer a robust and low-cost method based on proven concepts. It will let manufacturers concentrate on the chip and its design for performance, rather than worrying about the intricacies of the lithographic process. That is why we call our technology an enabler.”

With some of the leading LED producers, for example US-based Cree, now making a concerted effort to move to 6-inch wafer production, does PHABLE have the scalability to meet future requirements? “The 6-inch question is one that we often hear when we talk to the manufacturers,” admits Solak. “Our technology will be able to process them as easily as it does 4-inch wafers. We have a roadmap to increase both the throughput and the wafer size of our tools.”