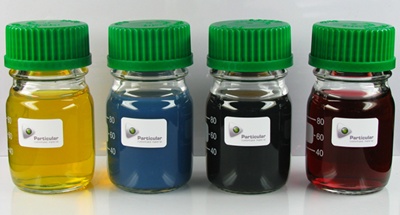 A new spin-off from Laser Zentrum Hannover (LZH) in Germany claims to be the first company in the world to apply laser ablation in liquids for industrial production of colloids.

Called “Particular”, the company began its operations in July 2010 and currently has three employees including co-founder and co-owner Niko Bärsch. The second co-founder, Stephan Barcikowski, remains with LZH and is acting as a consultant to the start-up.

Bärsch told optics.org that, since starting up, the company has been receiving public funding from the German Federal Ministry of Economics and Technology under a program called "EXIST Forschungstransfer", but that it was now looking at private funding options:

“The [public] funding is granted until the end of 2011,” said Bärsch. “Particular is also interested in a co-operation with venture capitalists and is currently discussing this.”

Particular’s technology is able to produce nanoparticles from pure metals. These nanoparticles can then be used to coat metallic parts with a roughened surface if needed, or for completely different applications such as the marking of biomolecules.

For example, pure gold nanoparticles can be used as nano-markers: Particular’s technology allows gold nano-markers to be bound to bio-molecules such as antibodies, proteins, or nucleic acids, and make them visible either in vitro or in vivo.

Laser advantages
By using direct laser ablation, rather than more conventional chemistry methods to generate nanoparticles, there are no chemical residues or precursors left in the nanoparticle matrix following production. According to Particular, other advantages of laser ablation include more economic manufacturing – especially from pure metals and alloys – as well as long durability.

To manufacture the tiny particles, Bärsch and colleagues use a 50 W picosecond-pulsed TruMicro5050 laser system from Trumpf. The 1030 nm solid-state laser offers a maximum pulse energy of 250 µJ in combination with a pulse duration of less than 10 ps – short enough to ensure that virtually no heat is transferred into the target medium.

Bärsch remarks that Particular is already beginning to see some commercial traction: “Since July, our nanoparticles have been bought by industrial and scientific customers for research and testing.”

“In addition, we are working on R&D projects together with LZH and industrial partners from the field of medical technology. We will be ready to provide these partners with nanomaterial for medical products after a successful conclusion of product tests.”

For more details about the company and its technology, visit particular.eu.