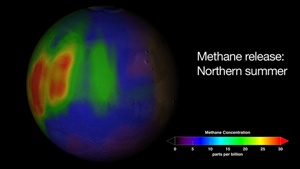 The Canadian Space Agency (CSA) has selected ABB Analytical Measurements to provide a key component for a spectrometer on a planned future mission to Mars.

Set for launch in 2016, the satellite-based Mars Atmospheric Trace Molecule Occultation Spectrometer (MATMOS) will investigate the Martian atmosphere, looking for traces of life. The analytical division of the global industrial giant will provide a spatial interferometer, the main optical component at the heart of the MATMOS system.

The CSA is collaborating with Caltech and NASA’s Jet Propulsion Laboratory (JPL) to develop the spectrometer, which is due to launch aboard the ExoMars Trace Gas Orbiter. Once in orbit, the object of the mission is to characterize the chemical composition of the Martian atmosphere, including trace gases. In particular, it will measure the distribution and sources of methane gas, giving an indication of whether its origin is geological or biological.

Optical selections for Mars
NASA and the European Space Agency (ESA) recently selected the five optical instruments for the joint mission. As well as MATMOS, these include:

• High-resolution Solar Occultation and Nadir spectrometer (SOIR/NOMAD): an infrared spectrometer to detect trace atmospheric gases, and map their location on the planet’s surface.

• High-resolution Stereo Color Imager (HiSCI): A camera that will provide four-color stereo imaging at 2 m resolution per pixel over an 8.5 km swathe.

• Mars Atmospheric Global Imaging Experiment (MAGIE): a wide-angle multi-spectral camera to provide global images in support of the other instruments.

David Southwood, the ESA director for Science and Robotic Exploration, said of the search for the all-important methane. “We got our first sniff of the gas with Mars Express in 2003; NASA has since clearly confirmed this. Mapping methane allows us to investigate further that most important of questions: is Mars a living planet, and if not, can or will it become so in the future?”

Toulouse launch
ABB Analytical Measurements, which is based in Quebec City, Canada, is also set to launch a new hyperspectral imaging instrument designed to detect hazardous chemicals from distance. Although the official launch of the MR-i Fourier transform infrared spectrometer will take place next year, the company previewed the instrument at SPIE’s recent European Defence and Security show in Toulouse, France.

With an extended detection range now covering more of the long-wave infrared (LWIR) region, the tool is suited to the emerging application of detecting so-called toxic industrial compounds (TICs), such as chlorine- and sulfur-based industrial chemicals. Though not previously considered to be “chemical weapons” in the traditional sense, these compounds are now regarded by some in the counter-terrorism field as a more likely threat in a terrorist attack, because of their widespread availability.

"The MR-i is the first commercially available FT-IR hyperspectral imaging spectroradiometer capable of dual-camera operation, simultaneously covering the mid- and long-wave IR region of the electromagnetic spectrum," says the company, which also touts the MR-i as the fastest such commercial imager ever built.

The dual-camera capability results from the use of both a mercury cadmium telluride (MCT) and indium antimonide (InSb) detector, and ranges up to a cut-off wavelength close to 14 µm.