World's leading supplier of thin-film photovoltaics now has an order backlog of 2.2GW that stretches out to 2015. 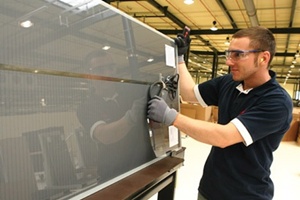 Photovoltaics market leader First Solar posted another strong increase in sales for the second quarter of 2010, while simultaneously pushing down its module manufacturing costs to $0.76/W ($0.81/W in Q1).

Reporting total sales of $588 million, up from $526 million during the same period in 2009 and from $568 million sequentially, CEO Robert Gilette said that the Tempe, Arizona company shipped systems capable of producing 344 MW at peak output power during the quarter.

With First predicting strong demand to continue out beyond 2010,it is adding significantly to that capacity as it looks to service a 2.2 GW pipeline of projects.

For 2010, First’s capacity to make solar modules based on thin CdTe films stands at 1.4 GW. But with major investment to increase its production in Malaysia and Germany ongoing, this will jump to 2.1 GW next year.

And despite the reduced feed-in tariff (FiT) support in key markets around the world largely taking effect from the start of 2011, the company is confident that demand will continue to grow strongly.

Market diversification
The key to that growth is a diversification of PV markets globally, as the FiT reduction in Germany will see installations in that largest single market begin to decline. North America and China will represent the two fastest-growing geographical markets over the next two years.

Support for that theory is strong, with First recently acquiring 530 MW of solar projects at various stages of development in North America through its $297 million cash purchase of NextLight Renewable Power.

In California, the “SB 722” law mandating a 33 percent level of renewable energy supply is said by First to be making progress through the legislative process, while bidding on 280&nbpMW of projects in China is also now under way.

One of the critical factors that has enabled First to push down its manufacturing cost-per-Watt figure is the steady increase in module efficiency that it has achieved. With efficiency now quoted at 11.2 percent, manufacturing costs have halved over the past five years, from $1.59/W in 2005 to $0.76/W in the latest quarter. First’s goal is to further reduce that figure to somewhere in the region of $0.55/W by 2014.

Demand for PV is particularly strong in Europe right now, as installers rush to beat the future FiT reductions. For example in Italy, the level of support will be cut by between 23 and 27 percent over the next four quarters, depending on the type of installation.

Reacting to that, First says that it has re-allocated module capacity from its systems business to meet the stronger module demand in Europe. The net result will be a slight decrease in the company’s total sales in 2010, and First trimmed its sales guidance for the full year from $2.6-$2.7 billion to $2.5-$2.6 billion as a result.