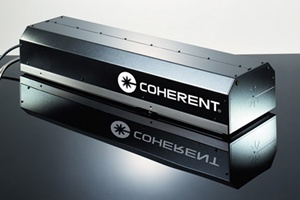 Coherent’s president and CEO John Ambroseo was in a suitably buoyant mood yesterday as he disclosed the company’s financial performance for its third fiscal quarter. “Q3 was very good for Coherent as we achieved record revenues, record orders and record operating income,” he told investors. “Our third quarter operating income was the best in the company’s history and we are encouraged by record-setting orders. And coming off some key design wins, our product pipeline is brimming.”

For its third fiscal quarter ended July 3, Coherent posted net sales of $166.7 million and a net income, on a US GAAP basis, of $14.4 million. These results compare to net sales of $98.5 million and a net loss of $7.0 million for the third quarter of fiscal 2009. Bookings received during Q3 totaled $180.6 million, an increase of 103.7% year-on-year. Coherent is predicting Q4 revenues in the range of $162 to $170 million depending on the timing of certain tool deliveries.

“Net sales for Q3 grew 11.8% sequentially which is primarily the result of a record microelectronics quarter coupled with solid growth in the materials processing market,” commented Ambroseo. “The flat-panel display market is unbelievably active right now. The success of touch-screen devices is driving a tremendous amount of demand and we're one of the leading suppliers for equipment. It really appears to be as close to unabated demand as you can get.”

Microelectronics boom
Coherent breaks its results down into four business areas: microelectronics, materials processing, scientific and instrumentation and OEM components. The clear winner in terms of performance was the microelectronics sector, reporting orders of $73.5 million up 2.4% sequentially and 234.9% versus the prior year period.

“Bookings for semiconductor capital equipment reflect the broader trend in the market and are running at more than twice the rate compared to a year ago,” noted Ambroseo. “Advanced packaging orders have increased more than 60% sequentially and 250% compared to the prior year period. The activity in the LED space can only be described as frenetic. We have also secured several key design wins for silicon singulation and scribing and the continued growth in mobile communications and computing is fueling orders for via drilling.”

Materials processing orders of $28.2 million increased 19.5% sequentially and 120.4% versus the prior year period. According to Ambroseo, low-end marking and engraving using carbon dioxide lasers has led the materials processing recovery over the last few quarters. He also believes that we are now seeing the first signs of recovery in high-end marking and engraving applications that use higher power carbon dioxide lasers, UV solid-state lasers or laser diodes. Coherent completed its acquisition of Beam Dynamics, a maker of laser machine tools, during Q3 and has moved the business to its facility in Santa Clara, California.

Stimulus nearly exhausted
In the scientific market, orders of $32.6 million were down 2.6% compared with Q2 2010 but were up 15.2% from the prior year period. “With stimulus funds nearly exhausted, scientific bookings are reverting to pre-stimulus levels,” commented Ambroseo. “Orders for Chameleon lasers led all major product categories as biological imaging continues to attract research funding.”

The life sciences market is enjoying significant investment, especially in Asia, which has led to a meaningful increase in Coherent’s instrumentation bookings. Orders of $46.3 million for instrumentation and OEM components were up 29.8% from the prior quarter and 80.6% versus the prior year period. “The continued rise in elective ophthalmic and aesthetic procedures led to higher orders in Q3 for our Existar excimer lasers used in refractive surgery and our G- and GEM Series CO2 and Genesis OPSL lasers for non-refractive ophthalmology. We are also monitoring some new techniques that hold promise to improve the treatment of certain eye diseases including diabetic retinopathy,” commented Ambroseo.

Finally, Coherent decided to delay its exit from its epitaxial growth facility in Finland until the end of 2010. The company did however proceed with the sale of the building and plans to record a loss on this transaction in Q4. Restructuring costs, including the loss on the sale of the building, will be approximately $4.5 million. A further update is expected in the Q4 conference call.